YOU ARE AT: Business MK > Charity > ‘We know that homelessness is a real problem’

‘We know that homelessness is a real problem’ 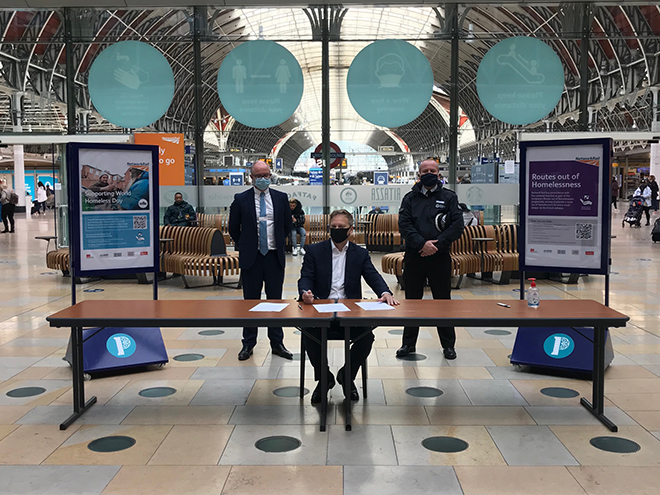 ﻿THE ORGANISATION that runs the UK’s rail infrastructure is spearheading a campaign to develop a route out of homelessness for every person sleeping rough around the rail network.

It commits the rail industry to help safeguard vulnerable people and communities. This includes working closely together with charities to create bespoke plans and training for station staff so they can give the right advice and support to people sleeping rough around the railway.

Mr Haines said: “We know that homelessness is a real problem and many vulnerable people are drawn to the rail network. We are committed to working with communities and charities to improve how we work together to address the challenges involved in supporting some of the country’s most marginalised people.”

Network Rail, whose national headquarters are next to Milton Keynes Central railway station, has worked to support homeless people and help to fundraise for associated charities in recent years. The Rough Sleeping on Rail charter forms an important part of Network Rail’s Routes out of Homelessness initiative.

This includes Railway Children’s Sleepout events, hosted at stations across the country, teaming up with industry partners and charities to host Christmas Day lunches for homeless people at London Euston and Birmingham New Street, providing pitches in stations across the country for Big Issue vendors and working with charities to provide operational guidance to employees to help vulnerable people in and around Network Rail stations and infrastructure.

In a change of approach to its charitable work, Network Rail has partnered with The Big Issue Foundation, Crisis, End Youth Homelessness, Railway Children and Shelter to focus on the homelessness issue. The national Routes out of Homelessness initiative will feature events to raise awareness for the charities, as well as fundraising and a new outreach programme at stations to support the government’s ambitions to end rough sleeping.

The outreach programme is being piloted by Shelter at Manchester Piccadilly station and includes new dedicated outreach teams at stations who will offer support to those in need and ensure a safe environment for them, railway staff and passengers. It will also launch at Birmingham New Street in December.

Murals representing each of the charities have been unveiled Glasgow Central, Leeds, London Charing Cross and Manchester Piccadilly stations. A piece created live by artist and Big Issue vendor John Cahill will be installed in Reading station’s new Assisted Travel Lounge when it opens next year.

Transport Secretary Grant Shapps said: “For those sleeping rough in our railway stations, particularly as we approach winter, life can be cold, challenging and uncertain.

“This new charter demonstrates the rail industry is committed to taking meaningful action. Having helped take StreetLink online with the popular app as Housing Minister, I am delighted that it will now be used to increase reporting of rough sleeping in order to rapidly bring expert help to those who are vulnerable.

“We must fight homelessness on all fronts, and I am proud the railways are playing their part in our ultimate ambition of ending rough sleeping within this Parliament.”

Tackling homelessness on the railway is an important issue for British Transport Police. Assistant Chief Constable Charlie Doyle said: “We welcome this charter to galvanise the collective efforts of industry, police and partners to support often the most vulnerable people with a route out of homelessness.”

He encouraged rail passengers to download the StreetLink app and use it to signpost when and where they see those in need of help. “This simple action may change someone’s life,” he added.

Rail operator signs up to tackle ‘a significant issue’

GOVIA Thameslink, which operates services between Bedford and London, is the first train operating company to put its name to the Rough Sleeping on Rail Charter. It was signed by chief operating officer Steve White at Luton station and witnessed by NOAH, a homeless organisation in Luton and a long-standing official charity partner for GTR.

Mr White said: “Homelessness is a significant issue for society. As another winter approaches, I am proud to be signing the charter on behalf of Govia Thameslink Railway to support the ambition to break the cycle of homelessness and end rough sleeping for good.

“Our intention is to support the most vulnerable and collaborate with others to offer routes out of homelessness.”

Last year, GTR launched its Great Sock Appeal, which collected more than 4,000 pairs of socks for homeless shelters across its route. This year GTR is also rolling out e-learning to all colleagues to help them support homeless people.

NOAH chief executive David Morris said: “We have worked with GTR for a number of years and in this time have collaborated on various projects to help disadvantaged people in the local community.

“It is great that the new training will educate staff about StreetLink, which is a key tool in helping someone begin their journey out of homelessness by connecting them with relevant services and outreach support.

“We applaud GTR for adopting the Charter at this early stage, and for committing to partner with NOAH’s new social enterprise Rainbow, through which more disadvantaged people will access jobs and training.”

Luton North MP Rachel Hopkins added: “I am pleased to see GTR sign up to the Rough Sleeping on Rail Charter and commit to working to end homelessness. Equipping their staff with the skills to support those in need is vitally important.

“NOAH is an integral part of our community, and the commitment to the new Charter will enable them to continue working with GTR to help those who have nowhere else to turn.”