YOU ARE AT: Business MK > Motoring > Space… crossing the final frontier 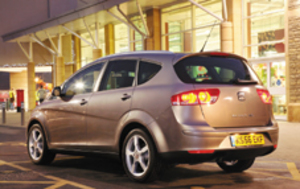 MOST parents will appreciate that, as the children grow, so the demand for space on a family trip grows correspondingly. For the first few years, trips involve the loading of buggies, changing bags, car seats… once they hit the teenage years, their size means that the kids once again need more space while on their travels.

Short of investing in a bulky 4×4 or a people-carrier, there has been little choice for those who either cannot or would rather not afford one. That is, until now.

Four of our children come on holiday with us, so I fully appreciate the value and importance of enough space to transport suitcases, golf clubs and the essential teenage accoutrements from airport to villa.

We regularly go to Spain – we and the kids love it – and many times I have said to my beloved how impressed I have been with the range of SEAT cars both for their performance and for their design (particularly the Alhambra people-carrier) which allows the maximum use of space when the kids come with us.

The down side of space, of course, is that while a people-carrier is perfect for days out, trips to the beach, to the water park or on a picnic, it does not cope well with car parks, particularly those at our local supermarket with very narrow bays and rather a lot of concrete pillars (at least, thatâ€™s what my wife tells me is her excuse).

While it will never be – and never claims to be – a people carrier, SEAT has made huge strides in crossing the great divide between space and performance with the new Altea XL, which offers comfortably the largest amount of luggage space in its class yet has lost none of its typically sporty SEAT dynamics.

XL by name and extra large by nature, the Altea arrived in UK showrooms last month to join the existing Altea and to fully capitalise on customer demands for ever greater space and flexibility.

Compared with the â€˜standardâ€™ Altea, the new XL is targeted much more at families. In doing so, however, this car does not sacrifice driving pleasure or fresh, appealing design.
SEAT designers have lengthened the Altea by 18.7cm to create more luggage space and extra rear leg room. The new model boasts a boot capacity of 532 litres as opposed to the already generous 409 litres offered by the Altea.

With the rear seats moved forwards by 14 cm, luggage space grows to a truly cavernous 635 litres – more than all of its competitors. If you plan to throw everything at the Altea XL – yes, even the kitchen sink – folding down the back seats liberates a total capacity of 1,604 litres.

The back seats can be moved back 2cm further than in the Altea for even more generous leg room. The front seats – just like those in the Altea – provide a commanding driving position, which gives a better viewpoint of the road ahead.

Despite its more practical appeal, the Altea XL keeps the highly rated SEAT design, rakish and dynamic. The XL has very similar features to its smaller brother – however, the rear is all new, featuring striking split lights and an appearance reminiscent of cars from the next class up. In addition, roof bars are fitted as standard.

The Altea XL is unashamedly a family car and safety, therefore, comes at the top of its priorities. The car achieves a full five stars in Euro NCAP for passenger protection and three stars for pedestrian protection.

For a family car, I am mightily impressed by this – great value for a car that takes space past the final frontier, as well as really good performance. The XL is not that big, though… I can still hear the kids bickering in the back.