YOU ARE AT: Business MK > Charity > Happy birthday, Captain Tom 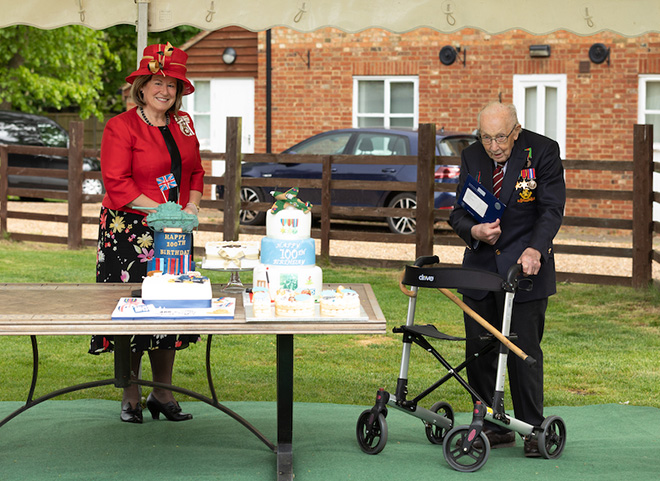 HM Lord-Lieutenant of Bedfordshire Helen Nellis presents Captain Tom Moore with a 100th birthday card from Her Majesty The Queen.

As Her Majesty’s representative in the county, she is pictured this morning (Thursday) at his home in Marston Moretaine.

She praised Captain Tom as an inspiration and said the whole county was proud of his efforts in raising more than £30 million for the NHS after completing 100 laps of his garden.

To mark his birthday, Captain Tom has also had a section of the Forest of Marston Vale named after him and received an inscribed copy of The Pilgrim’s Progress, written by Bedford’s most famous resident John Bunyan.

Cranfield University is to award the 100-year-old an honorary degree later this year.

Mrs Nellis said: “It was an honour to present Captain Tom Moore with his 100th birthday card from The Queen. It was a pleasure to meet this wonderful gentleman who has inspired so much generosity towards the outstanding staff of our NHS.

“We in Bedfordshire are incredibly proud of his contribution, which alongside the thousands of people who are working incredibly hard to keep us safe and well, demonstrate how individual acts, as well as people working together, can help us to build strong, compassionate and courageous communities.”

Part of the Forest of Marston Vale, recently accredited as part of The Queen’s Commonwealth Canopy, has been named Captain Tom Moore’s Spinney.

This week will also be memorable for Captain Tom as he tops the charts with his Michael Ball collaboration on the ‘You’ll Never Walk Alone’ single.

Central Bedfordshire Council chairman Cllr Brian Saunders has added his congratulations. “It was my pleasure to make contact with Captain Tom to congratulate his fundraising and I’ve been in touch again this week to wish him a very happy birthday.

“Given the extraordinary efforts he has gone to and the results he has delivered in terms of charitable contributions, we as a council will be honouring him later in the year. In our annual volunteering award scheme, we will be launching a new Captain Tom Moore award for outstanding contribution.

“We also hope, when life settles down a little, to host our own celebration for Tom with a civic reception for him and with his local community.”

Captain Tom has also received a message from Prime Minister Boris Johnson and enjoyed a flypast by the RAF of a Spitfire and Hurricane.