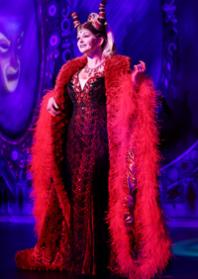 Bedford
It’s usually the villain we love to boo and the hapless yet appealing servant whom we applaud… and this year’s Snow White and the Seven Dwarfs is no exception.
Kev Orkian earned rave reviews as Buttons in last year’s pantomime Cinderella. He returns to the Milton Keynes stage as the hapless Herbert… and excels once more.
Great quips and the ability to handle even a taciturn three-year-old in his solo spot brought the house down.
Former Brookside actress Jennifer Ellison puts in a wonderful performance as the Wicked Queen, emanating evil and putting on a real show with her song and dance stints.
No surprise really, as Jennifer reached the semi-finals of ITV’s Dancing on Ice last year and has come to Milton Keynes fresh from a successful run in the hit West End musical Singin’ In The Rain.
Revelling in her role, she says: “This is the first baddy I’ve played in panto and I’m really excited about hearing those boos.”
As you would expect, Warwick Davis leads the troupe of dwarfs on a ‘diamond’ performance and takes centre stage big style for the show’s finale.
You will notice that the names of the Seven Dwarfs have been changed from those familiar from the Disney film. Disney retains the copyright for the names given to the dwarfs in the 1937 film (the dwarfs were nameless in the original Brothers Grimm story written in 1812, but christened in the Broadway play 100 years later).
Hence the slightly different names taking to the Milton Keynes stage to their animated counterparts: Prof, Loopy, Cheeky, Blusher, Blusher, Grumbly, Snoozy and Sniffley.
Shaun Dalton as the dashing Lorenzo of Lombardy and Kate Stewart as Snow White play their parts with aplomb and no little humour too.
We took my teenage daughter and stepson to the show wondering whether pantomime was now too young for them. Not a bit of it. While the songs were clearly better known to the grown-up members of the audience, intersperse liberally with One Direction hits and teenage daughter certainly was happy.
Stepson was singing along to many of the songs too. However, he is still receiving counselling after the Wicked Queen threatened to close down Nandos in Xscape – his favourite dining establishment – should Snow White survive her intended demise in the forest.
I have left pantomimes in previous years yearning for the days when Bradley Walsh packed the theatre and took pantomime to new heights of hilarity. He was a tough act to follow but not last night… Snow White comes pretty close to it.
Enjoy… merry Christmas and a happy new year.
Andrew Gibbs
For more on forthcoming shows at Milton Keynes Theatre, visit www.atgtickets.com/miltonkeynes
29