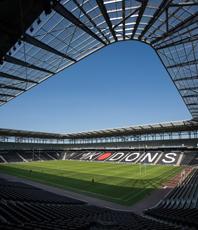 Bedford
The stadium, which is currently being extended to a 30,500 capacity, joins venues including Twickenham, the Millennium Stadium in Cardiff, the Olympic Stadium in London, Wembley and Old Trafford, on the list being considered by England Rugby 2015.
Its representatives have already met the Milton Keynes Major Event group, which includes MK Dons FC and Milton Keynes Council.
Hosting World Cup rugby would bring major economic and profile benefits to the city. Milton Keynes Major Event group chair Dr Ann Limb said: “Bringing events such as this to Milton Keynes and the region is a key economic activity that brings significant inward investment.”
stadiummk has a proven track record of delivering top flight rugby events. Last year it hosted Northampton Saints’ quarter- and semi-final matches in the Heineken Cup and is to stage this season’s Aviva Premiership encounter between the Saints and Saracens.
Milton Keynes Council leader Cllr Andrew Geary  said: “This is another opportunity to demonstrate what a great city this is to the widest possible audience.”
MK Dons Chairman Pete Winkelman said: “It is a fantastic achievement to have been recognised alongside some of the most prestigious sporting stadia in this country. As we have seen in recent years, stadiummk is a magnificent venue and it ticks all the boxes for international rugby.”
stadiummk was selected by England 2018 as a host venue in its unsuccessful bid to host football’s World Cup in six years time.
16