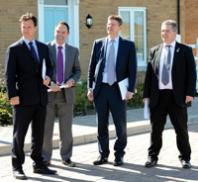 Bedford
Mr Clark, Financial Secretary to the Treasury, is pictured with Milton Keynes North MP Mark Lancaster, Simon Elcock, project director at Brooklands developer Places for People and Milton Keynes Council leader Cllr Andrew Geary on his visit, part of Milton Keynes’ bid to win a slice of the government’s City Deals funding.
The initiative offers cities extra help in maintaining its economic development and housing growth.
Mr Clark left impressed with how Brooklands had completed the transport, schools, parks and broadband infrastructure before beginning construction of the 2,500 homes planned for the site over the next 15 years.
Mr Lancaster said: “It was great to have the Minister for Cities join us in Milton Keynes and to show him round the Brooklands site. He was particularly impressed with Milton Keynes’ mantra of infrastructure before expansion and I was pleased to be able to show him an area where it had been put into practice so well.”
Places for People were recently voted Housebuilder of the Year in the prestigious Building Magazine Awards.
Mr Elcock said: “It is always very encouraging when senior political figures like the minister are brought to our development as an example of good practice.”
19