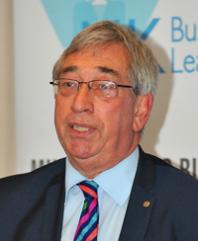 GOOD things come in twos and it just so happened that the speakers who closed another year of fascinating MK Business Leaders Partnership Breakfast Briefings talked about two related subjects.

Then in December Monica Ferguson, previewed the IF: Milton Keynes International Festival, of which she is director and which makes a welcome return later this year.

They spoke passionately about the large and diverse music, arts and culture scene in Milton Keynes and how it enriches all our lives.

And because it was a mainly business audience, they welcomed business community involvement because music, arts and culture can also be good for business.

Having your business associated with major events generates good PR and can be a platform for entertaining clients and rewarding staff. And there’s the good feeling that you are supporting your community

I am looking forward to the IF and MK50 which will be stand-out celebrations following on from the success of the Rugby World Cup in 2015.

But what about business supporting arts and culture, particularly those smaller grass roots and under-funded projects, beyond these big events?

During Lallie and Sean’s visit the discussion turned to those businesses that already generously respond to individual requests for money from arts, culture and community groups.

I suggested it could be better if they moved away from ad hoc funding and towards giving as part of a business strategy.

And if the contributions from many businesses could be pooled that combined generosity can be more effectively targeted and requests for help referred to a single contact, freeing up businesses to do what they do best.

That in turn led to a discussion around a possible arts and culture subsidy on the business rates, which has happened in South Bucks.

Now that might be a step too far at the moment, but a model for collective donating and effective distribution of charity funds already exists in Milton Keynes which could be used to attract businesses into supporting MK50.

Milton Keynes Community Foundation manages ‘named funds’ where companies or individuals pledge to give to a fund aimed at a specific sector or meeting a need they have identified.

MK Business Leaders has one supporting social enterprise and entrepreneurship and it is topped up with the proceeds of the annual MK Business Achievement Awards, taking place again in March 2016.

I have already met Milton Keynes Community Foundation chief executive Julia Upton to discuss whether this could happen.

There are some hurdles to overcome but I am optimistic 2016 could see businesses in Milton Keynes more ready, more able and more willing to support the arts and culture scene across the city.