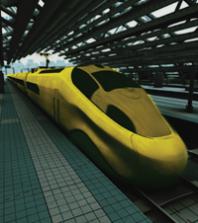 Bedford
Transport Secretary Justine Greening announced this morning that the first phase of the line – between London and Birmingham – was to go ahead, with the first trains planned to run in 2026.
The HS2 project, costing around £32 billion, is planned to be extended to northern England.
The first stage of the line to be built will run from London through the Chilterns – including North Buckinghamshire – to Birmingham.
The British Chambers of Commerce says that HS2 is essential to create much-needed capacity on the rail network.
BCC director general John Longworth said: “Businesses up and down the country will welcome the government’s decision to proceed with HS2. But this project must be seen as one part of a comprehensive package of infrastructure improvements to underpin economic growth.”
HS2 would treble capacity on the rail network, ease overcrowding and fare increases, he added.
Mr Longworth added: “HS2 is about increasing rail capacity in Britain, not just about speed. Britain cannot continue to ‘make do and mend’ when it comes to its sub-standard infrastructure. Fundamentally, our global competitiveness is at stake.
“However, the battle for HS2 is not yet won. Ministers must legislate swiftly, and within this parliament, to demonstrate their rock-solid commitment to delivering a national high speed rail network. Further delays, for any reason, are not an option.”
The next stage of HS2 will see hgh-speed links to Manchester and Leeds and ultimately further north and into Scotland.
51