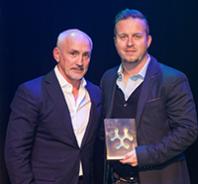 Based in Milton Keynes, the 28-strong Football Whispers team have developed the website and app from concept to two million users per month in less than two years.

Launched to assess the validity of transfer rumours using a unique algorithm, Football Whispers not only ranks transfer rumours with its FW Index, but also powers content for media giants Sky Sports, ESPN and The Sun.

The Sports Technology Awards attract entries from over 30 countries, representing around 70 sports and over 100 brands across 19 award categories.  The event was hosted by broadcaster Mark Chapman, presenter of the BBC’s Match of the Day 2.

Football Whispers chief executive Vivion Cox received the award from former world boxing champion Barry McGuigan. He said: “We feel proud and privileged to have won such an esteemed award.  Nominations were from across the globe and the other companies in the shortlist were exceptional so we were really surprised to win.