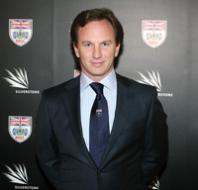 Bedford
The celebration on December 10 will recognise the extraordinary achievement of Red Bull Racing winning the Formula One Drivers’ Championship and Formula One Constructors’ Championship for the second successive season.
It has been organised by Milton Keynes Council. The event will include a demonstration of Red Bull Racing’s Formula One car, which will be in action along the full length of Midsummer Boulevard between thecentre:mk and Milton Keynes Central railway station.
It is hoped that world champion Sebastian Vettel will be at the wheel. Fellow driver Mark Webber and team principal Christian Horner (pictured) are also expected to attend.
Some city centre roads will be closed off to traffic as tens of thousands of well-wishers are expected to flood into the city centre to see their heroes.
The council is looking to secure business sponsorship of the celebration.
Council leader Andrew Geary said: "Our warm congratulations go out to the whole team at Tilbrook. Milton Keynes benefits enormously from having Red Bull Racing based here – it shines a massive spotlight on the city, bringing in tourism, investment and providing hundreds of jobs locally, ensuring that Milton Keynes is firmly on the map."
As well as having the star car in action, numerous attractions, exhibitions and demonstrations are being planned to highlight some of the event sponsors, and the excitement and technology behind Formula One.
Pam Gosal, the council’s corporate head of economic development, said: "We will be working very closely with our city centre partners and local businesses to realise the full economic benefit to Milton Keynes as this is an unforgettable event and one worthy of Red Bull Team Racing’s fantastic success."
21