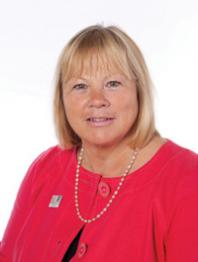 Bedford
The government and new HS2 chairman Sir David Higgins have announced plans for a new further education college – the first in Britain for 20 years – to help supply the estimated 2,000 apprenticeships that will be needed to build the line.
SEMLEP and key businesses from across its patch, which includes Milton Keynes, Bedfordshire and Aylesbury Vale, are now urging government to select the South East Midlands as the academy’s home, stressing the area’s global and already established reputation in high-performance technology and logistics.
SEMLEP chair Ann Limb (pictured) said: “The South East Midlands is already home to world leaders in the rail industry and, combined with our international reputation for transport and innovation, we have the pedigree, employer links and expertise to ensure the success of the HS2 Academy.
“Our established rail industry, rich heritage in engineering and our geography means we are perfectly placed to attract, train and employ apprentices and to provide the rail industry with the skills they require.”
The rail industry is already a key employer in the South East Midlands. Network Rail, which runs the UK’s rail infrastructure, has its national headquarters in Milton Keynes and the International Freight Terminal is at Daventry.
The campaign has added weight now that a new rail training academy developed by Siemens and the National Skills Academy for Railway Engineering, set to specialise in traction and rolling stock skills, is to open in Northampton next year.
The East West Rail project to reopen the rail line connecting Bedford and Milton Keynes with Bicester, Aylesbury and Oxford, is due to be completed by late 2017.
Silverstone Holdings managing director Richard Phillips, a SEMLEP board member, said: “It is not just our rail expertise that marks the South East Midlands as the ideal location for the new HS2 Academy. It is also our overall expertise in high performance technology and our reputation for excellence in the aerospace and automotive sectors.”
This includes the international Formula 1 circuit at Silverstone and the four Formula 1 teams who have their headquarters in the area: Red Bull in Milton Keynes, Mercedes AMG Petronas in Brackley, Force India at Silverstone and Banbury-based Marussia.
Millbrook, a 700-acre proving ground and technology centre in Bedfordshire, designs, tests and develops automotive and propulsion systems as well as pioneering low carbon technologies.
Luton Airport, a major air freight hub, is home to aerospace and defence hi tech engineering companies and General Motors Luton is the UK’s most productive van plant.
SEMLEP co-ordinates the FUSE Group, made up of the area’s nine further education colleges and designed to promote the work of colleges and their collective contribution to the local economy.
FUSE chair Ian Pryce, principal and chief executive of Bedford College, said: “The FUSE Colleges are committed to working together to make the SEMLEP area richer socially and economically.
"Between us, we have enormous strategic capacity, strength and expertise in all forms of engineering at every level. We are excited about HS2 and believe our commitment to productive partnerships would create a very special HS2 Academy.”
Milton Keynes, an integral part of the South East Midlands, has already proved its credentials by being selected to host the UK’s new £150 million Catapult centre for integrated transport systems, one of the first of its kind in the world.
The Transport Systems Catapult will provide a national hub for transport modelling and monitoring – testing latest theories on how transport systems interact and function against real-world demonstrators.
This will help UK businesses to develop effective and sustainable solutions to transport needs for both freight and people.
SEMLEP chief executive Daniel Mouawad said: “We have an exceptionally strong case to host the academy and are urging businesses and education providers to join us in pressing the government to visit the South East Midlands and see for themselves why we are the ideal location. We are already a centre of rail expertise.”
19