YOU ARE AT: Business MK > Lifestyle > Veterans get the VIP treatment at community partnership launch

Veterans get the VIP treatment at community partnership launch 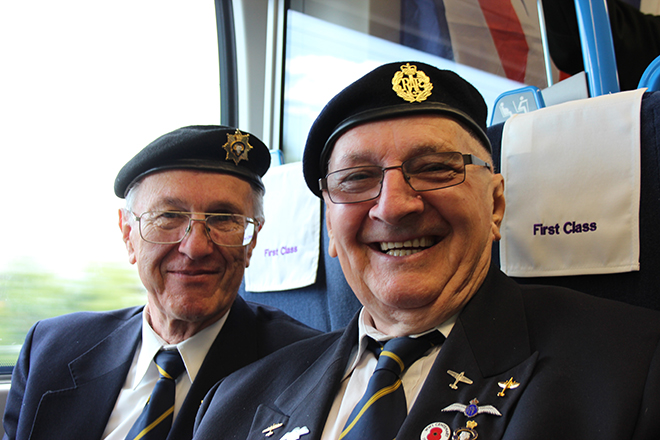 VETERANS enjoyed the VIP treatment as rail operator Thameslink commemorated the 75th D-Day anniversary and celebrated the launch of its newest partnership.

Royal British Legion members, local dignitaries and members of groups supporting older people were welcomed aboard a specially decorated first class carriage along the Bedford to St Albans route and travelled to a tea-dance style afternoon of entertainment at St Albans Museum + Gallery on Thursday to mark the 75thanniversary.

A total 80 special guests enjoyed cream teas and music from 1940s band The Femmes as Thameslink commemorated the Normandy Landings and remembered the bravery of those who played their part in liberating Europe.

The occasion also marked the launch of the new not-for-profit Community Rail Partnership for the stations on the Bedford to St Albans route. The CRP aims to connect the railway with the communities it serves by providing opportunities for ‘adopting’ a station, maintaining station floral displays, creating art work to brighten up an area of the station and helping to run special events such as on-train activities.

Thameslink and Great Northern managing director Tom Moran said: “Our new CRP is about bringing the community together, uniting residents with the stations that serve them. We look forward to hearing rail users’ ideas on how to improve their stations and how we can work together better.”

Bedford to St Albans City CRP line officer Andy Buckley added: “We are treading new ground in many ways as this is the first CRP based on a Thameslink mainline, and one of only a handful mainline-based CRPs nationally. We have fantastic opportunities to look forward to and I am looking forward to realising those opportunities together.”

Bedford station manager Bernie Lee said: “The CRP is fantastic and it is going to pull our communities together. It will also give people an insight into some of the challenges we face and give them a bit more understanding.”

Luton Airport Parkway and Harpenden station manager Joe Healy said: “I am excited about the new CRP. There is a lot of activity we are doing with gardening so we will be getting the community involved in that.”

Govia Thameslink Railway supports eight CRPS across its Great Northern, Southern and Thameslink route stations. Each CRP has a steering group made up of local stakeholders, who agree an activity plan for their partnership. Its partner in the event last Thursday was Community Embrace UK, which promotes diversity and inclusion by delivering communitiy events.

In his speech, Mr Moran paid tribute to the courage of railway workers during the Second World War, highlighting how they transported vital supplies, ammunition as well as injured servicemen and evacuees. “We will never forget the sacrifices they made nor the debt of gratitude we owe them,” he said.