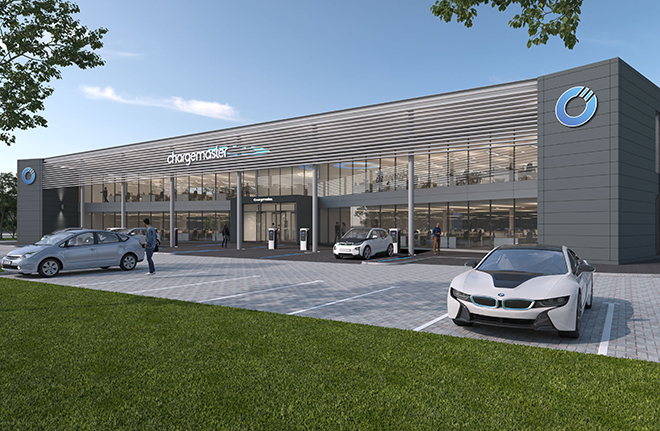 BP Chargemaster is set to bring 150 high-tech jobs to the city when it moves into its new premises currently under construction at Linford Wood.

The new premises will house the company’s office and manufacturing facilities. The two-storey 45,000 square foot headquarters will be around three triple the size of BP Chargemaster’s existing facilities in Luton.

The Linford Wood premises are being developed and financed by Milton Keynes Development Partnerships. It has awarded the contract to build the scheme to Knowlhill-based Parkway Construction MK.

BP Chargemaster operates Polar, the largest electric vehicle charging network in the UK, with more than 6,500 public charge points. It supplies public, workplace and home charging units across the UK and has installed more than 50,000 charging points in Europe.

Chief executive David Martell said: “We are very excited to be moving to Milton Keynes – undoubtedly the electric vehicle capital of the country – and to much larger premises that will enable our next phase of expansion and growth of our business. As well as increased head office space, we will be tripling the size of our manufacturing facility, allowing us to significantly expand our production capacity.”

The construction work is due to be completed by Christmas.

MKDP was established by Milton Keynes Council in 2013 to oversee and manage the continued growth and economic success of the city by selling and developing its land assets via third party developers and investors.

Its development director Matthew Green said: “It is a great testament to Milton Keynes’ reputation as a magnet for forward-thinking businesses of the future that BP Chargemaster chose to be based here.

“It is also an endorsement of our new strategic direction that, following a rigorous procurement process, BP decided to deal directly with MKDP rather than through a third party. This new strategy of developing our commercial land ourselves gives MKDP flexibility and the opportunity to create even greater value combined with a sustainable, long-term income stream for Milton Keynes Council.”

Having already generated more than one million sq ft of commercial space through land sales to developers, MKDP has 74 developable acres of commercial land remaining across Milton Keynes – more than half of the portfolio it was originally given by the council – available for its own development.

It will continue to work with third party developers on its residential portfolio.