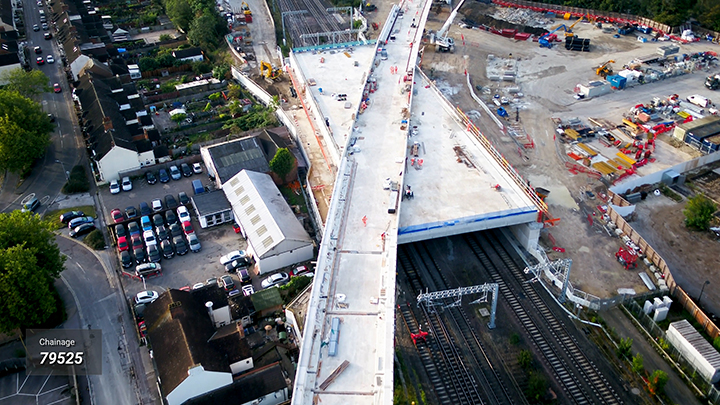 East West Rail’s flyover above the West Coast main line at Bletchley has saved £70 million for the tax payer and shaved six months off the project’s completion date.

NEW TECHNIQUES used to build a railway viaduct over the West Coast main line at Bletchley have accelerated the construction of the East West Rail link, reduced disruption to train services and saved the tax payer £70 million.

The innovative methods have cut costs for the public purse and prevented railway closures on the West Coast main line, one of Europe’s busiest passenger and freight railway routes.

The work has also accelerated construction on the section of East West Rail between Bicester and Bletchley by six months.

Engineers used the latest construction techniques to build a protective ‘box’ structure similar to a rectangular railway tunnel. It meant no need for separate supporting columns between the tracks on the main line and kept trains and passengers moving while work continued overhead.

“When we were established in 2018, we set out to build a new railway that minimises disruption, provides value for taxpayers and accelerates delivery. The construction of the new flyover at Bletchley is an example of how we are striving to meet these ambitions and bring communities from Oxford to Cambridge ever closer to a new, sustainable public transport link across the region.”

Flashback: Construction of the flyover in progress in May this year

Construction of the section of EWR between Bicester and Bletchley is being carried out by engineers from the East West Rail Alliance. Project director Mark Cuzner said: “At the start of the project, we built a protective wall next to the West Coast main line so we could safely build the box structure during the day when the railway is open, instead of working piecemeal at night time when the railway is closed.

“Most of the components for both the box structure and the flyover arrived pre-built and were simply assembled on site, like a model kit or set of Duplo bricks. The simplicity of construction meant we could safely reduce the workforce on site by 60%.”

Over the coming months, engineers will start laying track over the new box structure, which is built to last 120 years and replaces a flyover built in the 1960s that was not suitable to carry the new East West Rail trains. It was demolished in 2020.

For more information on the section of EWR between Bicester and Bletchley, visit: https://eastwestrail.co.uk/the-project/bicester-to-bletchley