YOU ARE AT: Business MK > Features > Back to the future… and living the electric dream

Back to the future… and living the electric dream 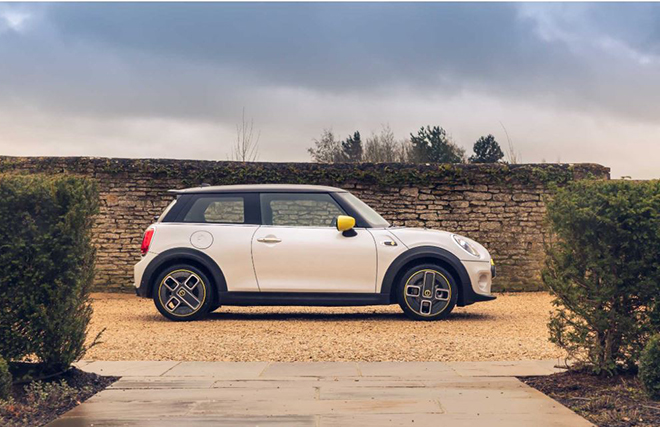 Andrew Gibbs puts the MINI Electric through its paces, relives the joy of his first car and reflects on a meeting of transport past, present and future on the A421.

MY FIRST car was a MINI. Bright red. Plastic seats. Four gears. 850cc of raw power. I’ve driven many cars since but it is still the one that sticks most in my memory.

Technology, vehicle design and customer preferences have moved on considerably since. Now motor manufacturers are turning their attention to the long-term future of their industry: electric. Petrol and diesel-powered vehicles are to be consigned to the history books as clean electric power becomes the driving force on the roads of the future.

MINI is on the case too, with its electric range causing quite a stir as motorists come to terms with the future. The marque is using its kudos as a motoring icon to push itself to the forefront of the driver’s mind when it comes to a new vehicle.

It is the first time I have driven an electric car. I have heard varied reports about their performance in comparison to traditionally powered vehicles and, to be honest, was somewhat intrigued about my two days behind the wheel of a new MINI Electric.

How long would the battery last before it needs charging? How much does it cost? Where can I charge it?

It is a strange feeling when you sit behind the wheel of an electric car. It looks the same; the dashboard is similar; the transmission is in the same place; the sound system and satnav is familiar. It’s just when you press the ignition, there’s no sound. It must be ready so I press the accelerator gingerly and away we go. Silently.

I can only liken it to the sensation after you board a main line train service to London, the Midlands or further afield. You settle in your seat, the doors close and the train moves silently away.

On to the open road, to put the car through its paces. And I am very pleasantly surprised.

I’m at the wheel of the MINI Electric, which has been in our showrooms since March and is a vehicle I realise I have seen in increasing numbers on our roads. The car I have borrowed is the range-topping Level 3 MINI, which comes with all the standard equipment, sports seats and sports leather steering wheel, a fully digital cockpit. It also offers front park distance control, the head-up display system I encountered previously in a BMW 7 Series (and is mighty impressive), sun roof and parking assistant.

The car is no slouch either.

For the techies among you, performance is a maximum 184bhp, with acceleration from standstill to 37mph in 3.9 seconds and 0-62mph in 7.3 seconds. The lithium-ion battery delivers a maximum range of 140-145 miles at around four miles per kilowatt hour. Carbon dioxide emissions: a big fat zero.

Charging is a doddle too. Home charging is simple thanks to the AC charging cables provided – just plug it in overnight in your garage – or stop off at one of the many charging points locally. MINI has a partnership with BP Chargemaster, via its Polar Plus network, to use its more than 7,000 public charging points around the UK.

There are a total of more than 9,000 currently and public charging with a standard AC cable takes two hours 30 minutes. Alternatively a DC rapid charger enables you to drive away fully charged after 36 minutes.

MINI is keen to emphasise the environmental and financial benefits of electric. The former are obvious; the latter significant too. MINI calculates the cost per mile of its Electric models as 4p, which is anything between 2.5 and six times cheaper than cars powered by petrol or diesel.

My time at the wheel of the MINI covered just over 100 miles during the two days and there was still at least 50% charge left, a level with which I was much impressed.

The MINI Electric has a lot going for it and more so when you let it stretch its legs on the open road. Acceleration is every bit as good, instant and responsive as a traditionally powered car and the handling is second to none. Transmission is automatic – which can mean a slight delay when you press the accelerator (annoying, in my book) – but there is no such delay in response with the MINI.

I was told when I collected the vehicle that, if I wanted to, I did not need to use the brake when slowing down. Just take your foot off the accelerator and the car will brake itself. I experimented and it’s true. An interesting feature and one I became accustomed to very quickly.

The MINI handles the challenges of urban driving seamlessly, moving among the stop-start traffic with ease. On the open road, be it dual carriageway or country lanes, it’s a joy to drive and puts a smile on your face. The interior is comfortable, spacious (a far cry from my bright red 850cc MINI of the 1980s) and everything you need is within easy reach and location. Simple is highly effective.

Electric is the way forward, we all recognise that, but it need not be expensive. There are three models in the MINI Electric range, starting from £24,400 OTR and peaking at the vehicle I’m driving; £30,400 OTR. If they are within your price range, take a look for yourself. There are some exceptional offers available – click here for more details.

Vehicles of all sizes and purposes are evolving at pace. There are plenty of traditionally fuelled cars on the road and will continue to be so for some time to come but every so often you experience one of those moments that puts life in whatever form into perspective.

One of my preferred routes when test-driving a car is the A421 between Bletchley and Buckingham. It’s a 11-mile stretch of open, straight, busy but not excessively so road that enables me to gain a really good feel for the car I’m driving.

Ideal for the MINI, I thought, and off I set. Coming out of Bletchley, on towards Buckingham when the traffic slows to a snail’s pace. 20mph but we’re moving steadily. Must be a tractor.

After a mile or so, the road levels out and I get a good view of the traffic ahead. No tractor… just a pony and trap setting a brisk pace at the head of a queue of some 20 or so cars. Patiently we travel in line until the trap driver steers the pony right towards Nash at the next roundabout, enabling us to continue our journey.

Electric and horse power in all its forms, I muse.