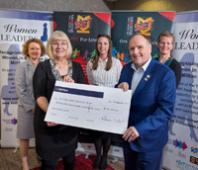 The total £10,405 is the surplus of money raised from the second Women Leaders MK Awards last year and included funds raised from a raffle on the evening.

Nominations for this year’s Women Leaders MK awards open on March 8 – International Women’s Day. The winners will be announced at a gala ceremony on October 13.: www.womenleadersmk.co.uk