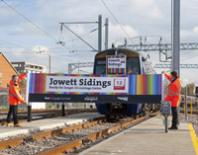 Bedford
Network Rail has lengthened 41 platforms at 12 stations on the Midland main line between Bedford and West Hampstead.
The longer platforms will enable the busiest trains at the busiest times of the day to be increased from eight carriages to 12.
First Capital Connect will lengthen its first services from eight to 12 carriages on December 12, along with its new timetable. There will be three in the morning rush hour from Bedford and one service from Brighton with the same number home again in the evening.
David Statham, First Capital Connect projects director, added: “This first phase of the Thameslink programme means we can now run our first longer trains. The next phase will see a new train fleet delivered in 2015 which will create many more longer services.”
Jim Crawford, Network Rail’s major programme director for Thameslink, said: “As well as more seats and less congestion at the busiest times of the day, passengers have more to look forward to next year with the new stations at Blackfriars and Farringdon opening.
"This will provide a huge improvement to facilities and access at these two important London stations.”
Network Rail has also opened new sidings at Bedford, built to accommodate the longer trains. The sidings have been named after railway stalwart Rodney Jowett, born and bred in the town and who worked on the railways for more than 40 years.
The sidings were opened with a train passing through a banner (pictured). Mr Jowett’s widow Shirley attended the ceremony.
Mr Jowett died in 2003. First Capital Connect managing director Neal Lawson said: “He was a railwayman through and through and a true gentleman, which makes him an inspiration to us all.”
18