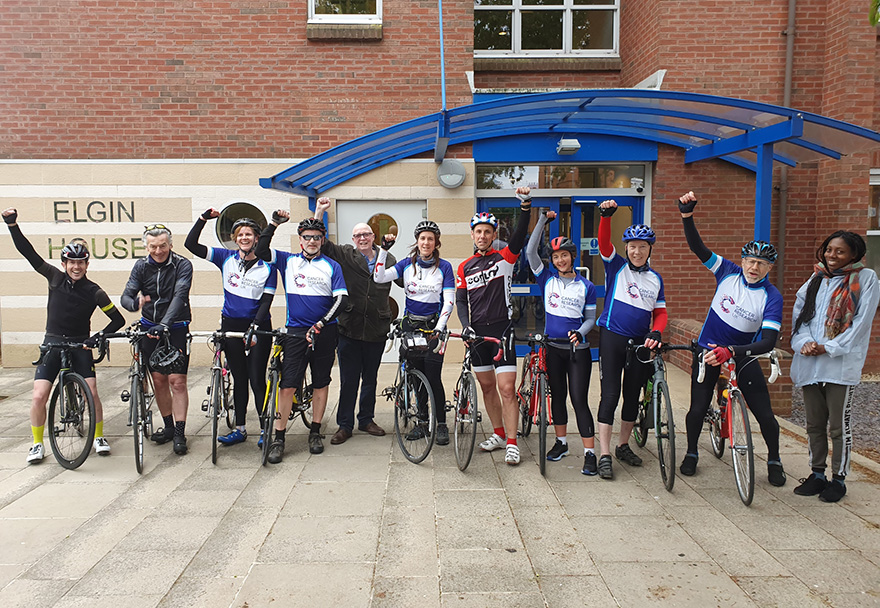 The Hewitsons team reach the finishing line at the firm’s Northampton office.

COLLEAGUES
at regional law firm Hewitsons have  cycled 125 miles over two days to raise money
for a good cause, in the law firm’s third annual ‘Tour de Hewitsons’.

Ten
team members from across the business pedalled between three of Hewitsons’ four
offices – in Cambridge, Milton Keynes and Northampton. The route was inspired
by the Cambridge-Milton Keynes-Oxford-Northampton growth region, which
Hewitsons has made a key focus lately.

Already
the team has raised more than £2,100 for Cancer Research UK, with donations still coming in. Its
members are now appealing to the public to help them reach their £4,000 target.

Team
leader Simon Biggin, a partner in the firm’s dispute resolution department,
said: “The Tour de Hewitsons is always tough but also very rewarding,
particularly as we know that our efforts are helping to raise money for an
important cause.

“This
year was no exception. We encountered a few hurdles along the way, from the
usual aches and pains to the odd navigational issue, but we made it in the end
– with all of us still smiling.”

The
money will help Cancer Research UK to continue funding scientists, doctors and
nurses working to beat cancer, as well as supporting its vital public
information services. Last year, the charity, which has a major research centre
in Cambridge, invested £54 million into research in the East of England.

Its
Eastern regional spokesperson Danielle Glavin said: “The Tour de Hewitsons is
no small undertaking so we are immensely grateful to the firm and its 2019
cycling team for their tremendous fundraising efforts.”

In the
UK, half of all people will be diagnosed with cancer at some stage in their
lives, she added. However, more people are surviving the disease now than ever
before, thanks to continuing research.

“It is
thanks in large part to the efforts of fundraisers like those at Hewitsons that
we are able to carry out this vital, lifesaving work.”

The
Tour de Hewitsons has been taking place since 2016, raising money for a
different cause each year. The inaugural event raised more than £3,000 for
Veterans Aid. Last year’s achieved a similar total for Dementia UK.

For
organiser Edward Wheen, a partner in Hewitsons’ employment and disputes team,
this year’s cause is particularly significant. He  was diagnosed with myeloma, a form of blood
cancer, in July last year but, thanks to successful treatment through a trial
funded by Cancer Research UK, he is now in remission.

“The speed of advance in cancer treatment is
astonishing and the prognosis is constantly improving,” he said. “This is
thanks in large part to the vital work being carried out by organisations like
Cancer Research UK so we really want to support them as much as we can. I am
also personally extremely grateful to the charity.”