YOU ARE AT: Business MK > Charity > Detection dogs can join the fight against COVID-19, says charity

Detection dogs can join the fight against COVID-19, says charity 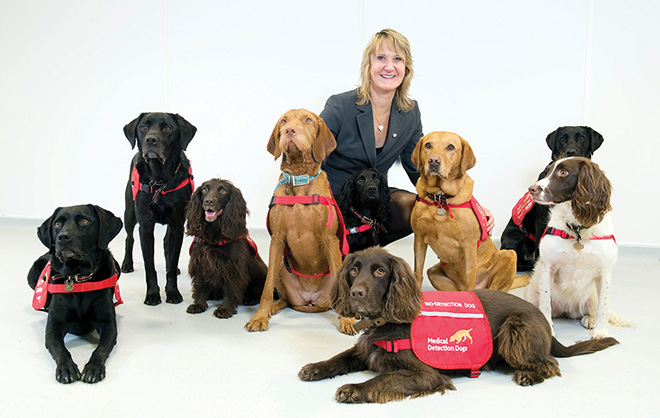 A SPECIALIST charity is investigating whether man’s best friend could play a role in preventing the spread of coronavirus.

Medical Detection Dogs has spent years researching the science behind dogs’ sense of smell and believes that dogs could detect the disease. It has always adopted a rigorous, scientific approach to its work and produced more than a dozen peer reviewed research papers which support its belief that each disease has its own unique odour.

Now the charity, based at Great Horwood near Buckingham, is working in partnership with the London School of Hygiene and Tropical Medicine and Durham University – a partnership that recently collaborated to prove that dogs can be trained to detect malaria.

Together they have started preparations to intensively train dogs so they could be ready in six weeks to help provide a rapid, non-invasive diagnosis towards the tail end of the epidemic. They have also approached government officials to outline how dogs can play a role in the fight against the disease.

Dogs searching for COVID-19 would be trained in the same way as those dogs the charity has already trained to detect diseases such as cancer, Parkinson’s and bacterial infections – by sniffing samples in the charity’s training room and indicating when they have found it.

They are also able to detect subtle changes in temperature of the skin so could potentially tell if someone has a fever.

Once trained, dogs could also be used to identify travellers entering the country infected with the virus or be deployed in other public spaces.

Medical Detection Dogs’ chief executive and co-founder Dr Claire Guest said: “In principle, we are sure that dogs could detect COVID-19. We are now looking into how we can safely catch the odour of the virus from patients and present it to the dogs.

“The aim is that dogs will be able to screen anyone, including those who are asymptomatic and tell us whether they need to be tested. This would be fast, effective and non-invasive and make sure the limited NHS testing resources are only used where they are really needed.”

Professor James Logan, head of department of disease control at The London School of Hygiene & Tropical Medicine and director of its centre of excellence for entomological research ARCTEC, said: “Our previous work demonstrated that dogs can detect odours from humans with a malaria infection with extremely high accuracy, above the World Health Organisation standards for a diagnostic.

“We know that other respiratory diseases like COVID-19, change our body odour so there is a very high chance that dogs will be able to detect it. This new diagnostic tool could revolutionise our response to COVID-19 in the short term, but particularly in the months to come, and could be profoundly impactful.”

Professor Steve Lindsay, of Durham University, added: “If the research is successful, we could use COVID-19 detection dogs at airports at the end of the epidemic to rapidly identify people carrying the virus. This would help prevent the re-emergence of the disease after we have brought the present epidemic under control.”