YOU ARE AT: Business MK > News > Chamber AGM focuses on recovery 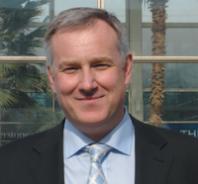 Mr Goodman (pictured) was speaking at the Chamber’s annual general meeting at De Vere Harben in Newport Pagnell. He told members that the Chamber would continue to play an important role in 2010 to help businesses to ready themselves when the recovery really starts to kick in through the provision of training and networking opportunities.

He also reflected on the Chamber’s achievements in 2009, including:
The AFGM also elected two new directors representing members with less than 50 employees: Nicholas Mann, managing director of new media agency Interdirect, and Linda Mansfield, of Events in Business. Both will join the board for three years, attending their first board meeting in January.
The AGM was combined with the Chamber’s Quarterly Economic Snapshot event, organised to gauge opinions from Chamber members as to what effect the current economic climate is having on Milton Keynes business and what the predictions are for the coming months.
The views help to formulate the Chamber’s regular updates to the British Chambers of Commerce, which in turn directly influence the views and facts passed on to the government.
Speakers at the event included Iain Stewart, the Conservative Party’s prospective conservative candidate for Milton Keynes South; Amway UK general manager UK & Ireland Andy Smith; Guy Hawking, of Invest Milton Keynes, and Ephraidge Rinomhota from Milton Keynes Council.
Mr Smith talked about the phenomenal success that locally-based company Amway had seen over the last six months or so even in a time of recession.
Mr Hawking told members about plans for Milton Keynes to pilot a new project to test out how people would go about using electric vehicles in and around the city.