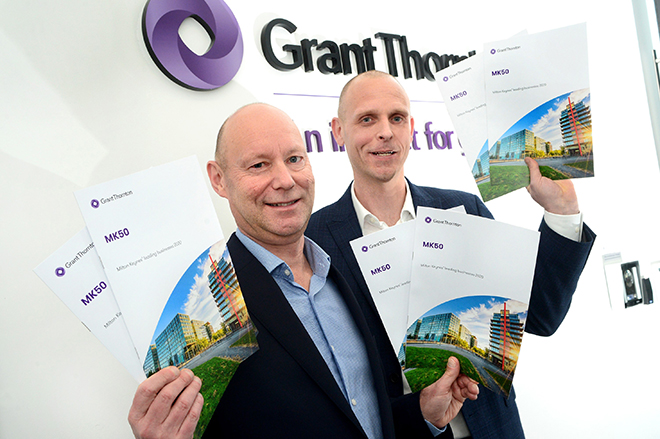 BUSINESSES in Milton Keynes are prospering both locally and in international markets which has resulted in a strong year of revenue growth, a new report has revealed.

The inaugural MK50 report, compiled by leading financial and business advisors, Grant Thornton, is an in-depth annual health check of the top 50 publicly and privately owned businesses in the Milton Keynes area.

Despite showing a year of overall growth, the 2020 report has highlighted an element of variability in performances for businesses in Milton Keynes. Larger businesses have led the way with growth in both turnover and profit, but smaller companies are facing more challenging times.

The MK50 report revealed that many of the biggest businesses in Milton Keynes are continuing to prosper, with turnover increasing by 6% to £18.7 billion and employment numbers rising 4.9%. However, the pace of growth compared to the previous 12 months has slowed – in the previous year turnover from the same 50 businesses grew by 9.5%.

In terms of profitability, the report highlighted a mixed bag of results despite there being no overall change in earnings before interest, tax, depreciation and amortisation. While there were some standout results – 13 businesses grew their profits by more than 30% – 12 companies experienced their profits shrinking by the same amount.

The report also revealed that 60% of businesses recorded lower profits than the previous 12 months.

Mike Hughes, head of advisory at Grant Thornton’s Milton Keynes office, presented the findings. He said: “The largest companies have really prospered in the past year, with the ten biggest firms trading far stronger than the rest. It’s likely these companies have better access to funding and are less dependent on the local and UK market, focusing heavily instead on international business.

“The report also highlights an increase in the overall number of employees, and a modest 1.8% average salary increase which will help the local economy. With a more stable political environment now likely in the near term, it feels as if there is also an underlying sentiment of confidence in future growth.”

As one of the UK’s fastest growing towns, Milton Keynes continues to attract national and international businesses to the area. The report highlighted the town’s diversity with regards to international ownership and reach.

Only 17 of the 50 businesses listed in Grant Thornton’s survey are UK-owned. More than a quarter are owned by a US parent, followed by 16% which are German owned.

Mr Hughes said: “There has been a long tradition of international businesses locating to Milton Keynes, partly linked with the range of incentives the town offers in order to attract investment. Although the town is still relatively new, established 52 years ago, it has become a hub for international business activity. Looking at the types of businesses located here, it is fantastic to see such a broad and diverse range of businesses, both big and small, making Milton Keynes their home.”

Despite businesses in the MK50 owning nearly 200 overseas subsidiaries in 40 countries, 88% of total turnover of the MK50 is derived from the UK. This highlights the importance of the local and UK market, even to the biggest companies.

The findings of the first MK50 report were presented at an event hosted at Grant Thornton’s collaboration space in its Milton Keynes office. Speakers included Mr Hughes and Adrian Day, the group CEO of Milton Keynes-based Beardow & Adams (Adhesives) Ltd, who gave a presentation about the international business journey of the business.

“Our business has grown strongly over the past 12 months, in part driven by our investments internationally, which are a core part of the group,” he said. “However, we continue to see Milton Keynes as our home and benefit from its skills base and robust local economy. We remain highly optimistic about our future in the town.”

MK50 gives a unique insight into the performance of the top 50 publicly and privately owned businesses in Milton Keynes. Compiled by using the most recent publicly available accounts (as at January 2020), the report provides a yardstick against which the town area can assess its economic performance. It also offers businesses the opportunity to benchmark themselves against their peers.

To download a copy of the report, visit: https://www.grantthornton.co.uk/en/insights/mk50.