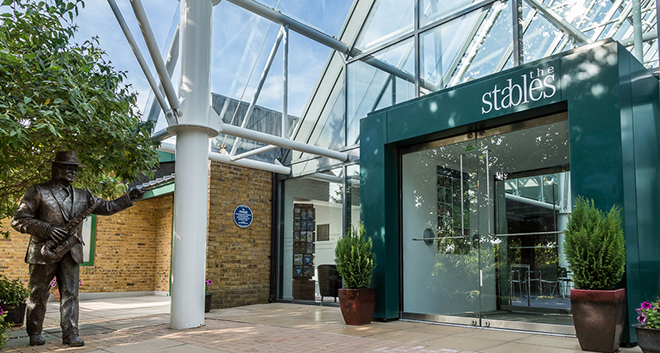 A LEADING manufacturer of professional
monitor and speaker systems has delivered a major commitment to nurturing music
talent and live music.

PMC has equipped the recording studio
facilities at The Stables music and education venue in Wavendon with its
professional monitor speakers. It has also installed
its wafer2 on wall speakers in the communal areas of the theatre to ensure the
playback of music is of the highest quality and sounds as good as the live
music events.

PMC,
founded in 1991 and based in Biggleswade, has also agreed to sponsor of tickets for
the venue’s upcoming events.

The company is one of the very few that
have received an Emmy award for contribution to recording excellence. Its
equipment has been used in the music production for a raft of blockbuster films
including Titanic, Pearl Harbor, Captain Phillips, Skyfall and Pirates of the
Caribbean.

Owner
and founder Peter Thomas said: “I have long been a regular visitor to The Stables and
value the tremendous variety of artists they present and the hugely important
education work they do. The late John Dankworth was, and Cleo Laine still is a
big supporter of live music and music education and I am extremely proud to be
able to add PMC’s name to the fantastic work done by the team at The Stables.

“It is only by keeping music education
at the fore and presenting live music that the hi-fi industry exists, so it is
vital that we as an industry play our part in supporting the work of facilities
like this.”

Founded by John Dankworth and Cleo Laine 1970, The Stables was
originally housed in the the old stable in the grounds of their home. The venue
hosted around 50 concerts in its first year. Today it features over 350
concerts a year and around 250 education events, which include the National
Youth Music Camps.

Today
The Stables houses two auditoriums:
the Jim Marshall Auditorium which houses 438 people and the smaller Stage 2
with capacity for 100.