YOU ARE AT: Business MK > News > You cannot digitalise the human capacity for ingenuity’

You cannot digitalise the human capacity for ingenuity’ 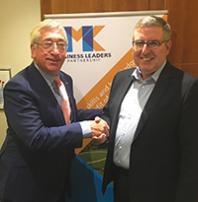 Every business has a responsibility to harness the power of technology and the internet leaves companies with nowhere to hide, Gary Turner told an audience of business leaders.

“The companies who succeed over the next couple of decades will be those who harness digitalisation, minimise the disruption and embrace humanisation," he added.

Mr Turner, UK managing director of Milton Keynes-based Xero Accounting, was speaking at a dinner organised by Milton Keynes Business Leaders Partnership. A massive advocate for technology, he addressed the rapid pace of technology and the effect this has had on businesses over the last three decades.

Xero set up its UK operation in Central Milton Keynes six years ago and Mr Turner reflected on the growth of technology and the effect it has had on businesses, from transforming the efficiency of employees to the arrival of customer relationship management software to boost productivity.

Even the internet itself, he said, which has reshaped entire industries.

Mr Turner told his audience: “We all have a responsibility to harness technology within our businesses, as the implications of it are enormous, and we have all seen businesses come and go as a result.”

Speaking on the subject of disruptive technology, he cited three key points which irrevocably disrupted the way we do business. Telecommunications have brought the death of distance, he said.

“Where you are is no longer an impediment in business and we no longer rely on physicality. For instance, the best search engine for finding out about Milton Keynes just happens to be in California.”

Businesses are increasingly becoming more systemised and technology is being used as a science, Mr Turner said. Decisions are being made through real data and success is being measured through pay per clicks.

He added: “Science is incredibly prevalent in our business. There are a group of scientists entering the working world today, they are younger, they talk a new language and, through them, there is a new world of business emerging.”

Mixing human instinct with the technical tools we have available today is a winning recipe, he said.

Addressing the issue of Artificial Intelligence, he dismissed opinion in the media that AI was on the brink of wiping out human employment.

He recounted his experience of righting an overturned, self-driving delivery robot in a Central Milton Keynes, which was captured on social media and immediately went viral.

“I believe we are a long way off from the generalisation of AI. This only goes to reinforce the fact that, without the human element, we are not ready for this level of disruption.

“We still need people to do jobs and you cannot digitalise the human capacity for ingenuity. People today are working for a sense of purpose, a meaningful way of life, and not just a job.

“People are going to want to work with a company who does good, helps businesses and makes their staff happy – and that is not going to be run off the road by digital disruption.”