YOU ARE AT: Business MK > News > Work begins on improving routes between Bletchley station and town centre 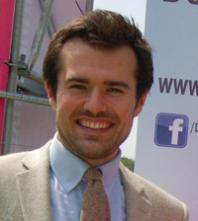 The Fixing the Links project by Milton Keynes Council aims to improve the journey experience between the railway station and the town centre for pedestrians and cyclists and to address issues such as road safety.

The East West Rail link due to open in 2019 earmarks Bletchley as a key station on its route between Cambridge and Oxford.

The council believes the town needs to have a fit-for-purpose route for commuters and visitors to use for the town centre and other key destinations such as MK1 shopping and stadiummk.

Cllr Rob Middleton (pictured), cabinet member with responsibility for commercialism and resources said: “ For too many years, Bletchley has failed to see the investment it has so sorely needed – a belief held by many Bletchley residents.”

The council was won its bid for £1.5 million of growth Deal funding from the South East Midlands local Enterprise Partnership and has secured a further £2 million investment from local sources.

The work will be carried out by the council’s highway service provider Ringway and will be completed by the summer.

The project is one of a series of regeneration projects in the town. In 2014 the council built the new Bletchley Bus Station, which includes the electric bus charging plates. Queensway will be opened up to through traffic later this year.