YOU ARE AT: Business MK > News > Woburn Forest holiday village will bring £20m a year to region’s economy 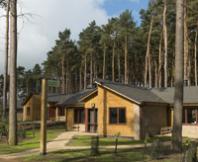 It has already recruited 40 local businesses to supply the 625-lodge complex, which expects to welcome around 350,000 guests each year.

And the 362-acre site has also created more than 1,500 jobs as well as the 1,200 created during the two-year construction programme.

Center Parcs Woburn Forest is putting the finishing touches ahead of welcoming its first guests on Friday (June 6).

Business MK and Business2Business joined media colleagues at the weekend for a preview of the impressive site set in pine forest on the Duke of Bedford estate.

The new Village is home to Center Parcs’ largest Subtropical Swimming Paradise, along with a state-of-the-art Aqua Sana spa, 625 lodges, a 75-bedroom hotel, six Spa Suites and a host of restaurants, shops and more than 100 leisure activities.

Its opening will push the number of guests at Center Parcs’ five holiday villages in the UK beyond the two million mark for the first time, said chief executive Martin Dalby.

Bookings for the park are well in line with forecasts and Center Parcs, which has seen 97.2% occupancy last year and figures of between 96% and 99% during the recession-hit last five years, expects that trend to continue.

Mr Dalby said that the impact of Woburn Forest on the local economy would be significant. Of the 1,500 new jobs, 40% have ben taken by workers under the age of 24 and 90% had gone to people living within 15 miles of the site.

“The difference we are trying to make to employment is there for all to see,” Mr Dalby added.

Mr Dalby said: “These contracts will also provide more jobs and that is great news for the region.”