YOU ARE AT: Business MK > News > Wizz Air to create 150 new jobs in expansion at London Luton 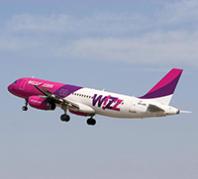 The airline is to add four Airbus A320 aircraft to its Luton fleet by June next year and is to open five new routes to Cyprus, Slovakia, Estonia, Ukraine and Albania.

The growth will create 150 new jobs at Luton.

Chief corporate officer Owain Jones said: “We are thrilled that after only five months on from opening our base in Luton, we are announcing a massive expansion by allocating four additional aircraft Airbus A320 to our Luton fleet.

“Our investment brings benefits to the local community by creating 150 new direct jobs, as well as stimulating more jobs market in aviation and related industries.”

Over the past 12 months Wizz air has carried more than 5.5 million passengers on its Luton routes alone, an increase of 11% compared to 2016 and making it the second largest carrier at Luton airport.

The airline is also to add extra weekly flights on three of its most popular routes to Tel Aviv, Suceava in Romania and Prishtina in Serbia.

London Luton chief executive Nick Barton said: “The announcement that Wizz Air is expanding its operation at LLA is great news for passengers, the airport and the local economy.

“Our redevelopment is focused on creating an even better experience for more passengers and that includes increasing our choice of destinations. We look forward to building on our already strong relationship with Wizz.”