YOU ARE AT: Business MK > News > Where the streets are paved with pantomime gold…

Where the streets are paved with pantomime gold… 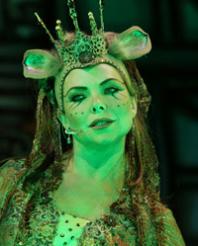 It’s very, very funny. It appeals to the mums, dads and grandparents just as much as the children. The performers are first class, the costumes are spectacular, the script is – well – everything you’d expect in a panto and it’s just damned good fun.

Dick Whittington has the usual line-up of star names, headed by the excellent Samantha Womack pictured (best known as Ronnie Mitchell in EastEnders) as Queen Rat .

“I love panto and being the baddie means I get the best and biggest response from the audience,” she says. “It will also be lovely for me as I live in Bedfordshire and MK is my local theatre.”

She is joined by former X Factor finalist Stacey Solomon as Fairy Bow Bells, who returned from the Australian jungle as co-host of I’m A Celebrity – Extra Camp only days before the curtain rose at Milton Keynes Theatre for the panto’s first night.

Fair play to her, she has not taken long to learn her lines and immerse herself in the panto spirit.

Kev Orkian, as Idle Jack, and Kevin Brewis as the outrageously over the top Sarah the Cook steal the show for visual comedy but the whole performance is wonderful and, I guarantee, you will leave the theatre at the end with a broad smile on your face.

There’s not a lot more to say, really, If you haven’t booked yet, scoop up the children and/or grandchildren and make a date. It’s really worth it.

Dick Whittington is at Milton Keynes Theatre until January 15. For tickets, visit www.atgtickets.com/venues/milton-keynes-theatre/