YOU ARE AT: Business MK > News > Welcome to the start of ’10 Amazing Days’

Welcome to the start of ’10 Amazing Days’ 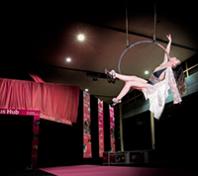 Leaders from business, the public and voluntary sectors and the arts were in the Circus hub in centre:mk’s Middleton Hall for the official opening and spectacular start to the ten-day festival.

The Circus Hub will play a central role in IF: 2018 as the 250th anniversary of circus in England is being marked this year. Skilled troupes from across the world will be performing to sell-out audiences in Middleton Hall and at other venues, including the Spiegeltent in Campbell Park and Milton Keynes Theatre.

Festival director Monica Ferguson said: “We welcome visitors and artistic talent from all over the world to the town, and we look forward to enjoying the outstanding companies and artists who will step into the spotlight at the Circus Hub in the heart of Milton Keynes at centre:mk.”

The programme spans the genres, a world-class, multi-arts programme including a feast of stand-up comedy, live music, circus shows, outdoor and large-scale events, pop-ups, and free and family activities.

centre:mk, who are the proud headline sponsors of the biennial festival, now in its fifth edition, will see international acts such as Companyìa Vavel Circus, a high energy circus show, and Motionhouse & NoFit State Circus, in which a fusion of dance and circus collide, perform in, Middleton Hall, which will be transformed into the festival’s Circus Hub.

Moroccan theatre company Groupe Acrobatique de Tanger will make their only UK performance this year of its new show Halka at the festival. Director Sanae El Kamouoni said: “We are thrilled to be travelling to Milton Keynes to stage the UK Premiere of our new acrobatic show Halka in the Circus Hub in centre:mk.

“Halka is the Arabic word for the crowd that gathers round a group of performers, so a busy shopping centre full of families and shoppers is a perfect place for us to perform.”

centre:mk has been headline sponsor of IF since 2016. It has supported the festival since 2012, hosting the ground-breaking Boat Project by Lone Twin, followed by the Architects of Air’s Pentalum in Middleton Hall in 2014.

Centre director Kevin Duffy said: “We are thrilled to once again be a part of the International Festival, which will this year celebrate the vibrancy of centre:mk and wider Milton Keynes through world-class circus performances.

“To be named the festival’s ‘Circus Hub’ puts us at the heart of the ten-day event, which we are extremely proud of. It provides us with a platform in which to remind the world that centre:mk is at the forefront of international shopping and leisure destinations, celebrating uniqueness through fashion, beauty, arts and culture.”

The Circus Hub marks 250 years since showman, entrepreneur and equestrian rider Philip Astley, drew out a circle in the ground in 1768 on an abandoned patch of land near London’s Waterloo, and filled it with astounding physical acts, creating the world’s very first circus.

Monica Ferguson said: “This year marks the fifth edition of the International Festival, officially recognised as one of Europe’s most remarkable Festivals. We’re excited to present the Circus Hub in centre:mk and work in partnership with centre:mk as headline sponsors.”