YOU ARE AT: Business MK > News > ‘We could so easily have lost our children…’

‘We could so easily have lost our children…’ 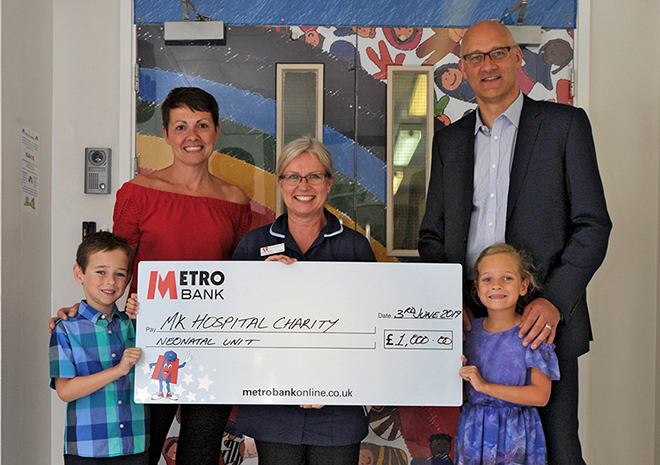 A DIRECTOR of a planning consultancy has presented a £1,000 cheque to the unit at Milton Keynes Hospital that cared for his twins after they were born 11 weeks prematurely.

Paul Smith and his wife Dee are pictured after handing over the cheque to the hospital’s neonatal unit to mark the tenth anniversary of his business Apex Planning Consultants.

“The twins were very poorly when they were first born, particularly our son whose heart stopped on day four and was receiving 24-hour oxygen for the first eight months of his life due to chronic lung disease,” Paul recalls. “They were so small they fit into my hand, from crown to rump, and grew stronger because of their determination but also that of the staff of the neonatal department.

“The staff were incredibly relaxed and accommodating of us new parents and appreciated the challenges faced by us, as well as other new parents in the ward – including some parents, like me, who were working to keep businesses going too.”

Apex Planning Consultants faced a number of challenges in its early years, including navigating the recession and growing a business from the ground up in a depressed market; dealing with a lockout from a previous employer and the emergence of a number of competitors.

Paul is also a a founder of the Property Development Quarterly regional networking group which regularly attracts 120 delegates and speakers fromorganisations such as the National Infrastructure Commission, the Bank of England, the Department of International Trade and the South East Midlands Local Enterprise Partnership.

“We could so easily have lost our two [children] had it not been for the amazing care provided at the hospital,” says Paul. “We always knew that the thanks and token gesture we gave when we finally took the twins home was not enough and this tenth anniversary gives us a chance to make up for that.”

Apex’s donation will go towards a new phototherapy system for the unit, used to treat neonatal jaundice and provide phototherapy to babies. “But the parents can still have cuddles and feed them which will make such a difference to the unit and provide parents more contact with their baby,” says Karen Rice, lead nurse in the neonatal unit.

“Some babies are only with us briefly but others like Paul and Dee’s children, are with us for much longer, sometimes for 13 weeks-plus, so you can imagine being able to provide them with something extra special in facilities and equipment is amazing and all thanks to money raised and donated by people like Paul.”