YOU ARE AT: Business MK > News > Wafted back to mark airline’s milestone

Wafted back to mark airline’s milestone 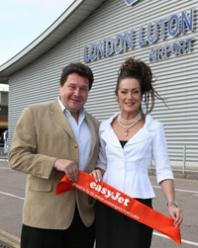 And actress Lorraine Chase, who checked in easyJet’s first ever passenger in 1995 – also through Luton – was on hand to toast the milestone occasion.
She also joined passengers and easyJet crew to raise a glass to toast the airline’s newest route from London Luton, to Corfu.
Lorraine Chase has been synonymous with Luton since the Campari TV commercial which kick-started her career and spawned her catchphrase “No, Luton Airport!” as a reply to the question "Were you truly wafted here from paradise?” The commercial then inspired the 1979 hit record Luton Airport by Cats UK.
She is pictured with easyJet’s UK director Paul Simmons. He said: “We could not think of anyone more appropriate to celebrate our milestone achievement and new Corfu route launch with than Lorraine."
easyJet will begin flying to Corfu next year, bringing its total of destinations from London Luton to 34.