YOU ARE AT: Business MK > News > VW partners with green energy supplier ahead of launch of first electric car 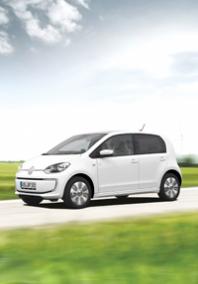 Volkswagen Group (UK), headquartered at Blakelands, has signed a partnership deal with green energy supplier Ecotricity. Parent company Volkswagen Group has said its sights are set on being the global market leader in electric vehicles within five years.
Ecotricity, the world’s first ‘green electricity’ company when it was founded in 1995, is now the preferred supplier of green energy for Volkswagen Group customers in the UK.
This means that any customer purchasing a VW electric will be offered, at point of sale, the option to adopt Ecotricity’s 100 per cent green tariff for their home and vehicle energy supplies.
The order books for VW’s first electric model the e-up! city car pictured open next month, with the first deliveries in January.
Volkswagen Group (UK) head of environmental management Andrew Bannister said: “We are delighted to be able to offer those customers who are making a choice to purchase an electric-powered car the option to adopt a green energy package, meaning their motoring can be powered by 100 per cent renewable energy.
"We are confident those choosing an electric Group product will appreciate the benefits this new tariff offers them.”
Ecotricity powers more than 75,000 homes and businesses from its fleet of wind and sun parks.
Founder Dale Vince said: “We’re really pleased to be working with Volkswagen, a company which is bringing lots of new EVs to the market.
“Ideally an electric car should be charged using 100 per cent renewable energy; otherwise you are still powering it from fossil fuels. Running a car on green electricity from the wind and the sun is the last piece of the jigsaw – it is the ultimate in green motoring.
“Now you can plug your car into your house at the end of each day and recharge it on renewables. It is an exciting new world.”

Following the e-up!, VW Group is planning to launch the e-Golf next summer and an Audi A3 Sportback e-tron plug-in hybrid at the end of the year.

Key to the success of these cars will be their ‘normality’, said a spokesman. “These are conventional and existing popular hatchbacks – powered by electricity.”