YOU ARE AT: Business MK > News > Voters must decide on one fundamental issue, John Redwood tells business leaders 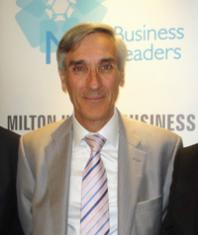 "Fundamentally it is about what kind of country we are, a self-governing country or one which has ever closer integration with a European system," he said at an MK Business Leaders Partnership dinner on Friday.

Mr Redwood was answering questions on a range of topics after delivering an overview of the global investment outlook on behalf of the private client investment firm and sponsor of the evening Charles Stanley, where he is the company’s global strategist.

He told a large audience of MK BLP members and guests that he was speaking for Charles Stanley which holds a neutral view on the Referendum and was not speaking for Brexit.

He prefaced other comments, including that on the single referendum issue as his personal view. A minute’s silence for MP Jo Cox was held at the beginning of the evening.

Mr Redwood said Charles Stanley had looked at the various scenarios likely to follow the vote tomorrow (Thursday). They were:

‘Bad Brexit’ – which the Treasury had described as a massive confidence loss and trade damaged in an unspecified and dramatic way;

‘Good Brexit’ – people would carry on trading after a short term confidence shock;

‘Good Remain’ – The Euro muddles through, the UK manages not to be dragged into the Euro project and Turkey doesn’t join the EU immediately;

‘Bad Remain’ – the reverse of Good Remain with another Euro crisis, a further big influx of migrants and a European banking crisis plunging the UK into recession.

Mr Redwood said Charles Stanley thought a Brexit would be closer to the ‘good’ than the ‘bad’, and the overall outcome is likely to be somewhere between the two ‘good’ scenarios.

MKBLP chairman Dr Philip Smith said: "The timing of our quarterly dinner was most opportune just as the global investment climate grapples with the prospect of the UK perhaps leaving the EU.

"In what was a stimulating presentation, John was very clear about the investment landscape at this time."