YOU ARE AT: Business MK > Charity > Virtual relay raises £13.5k for Willen Hospice 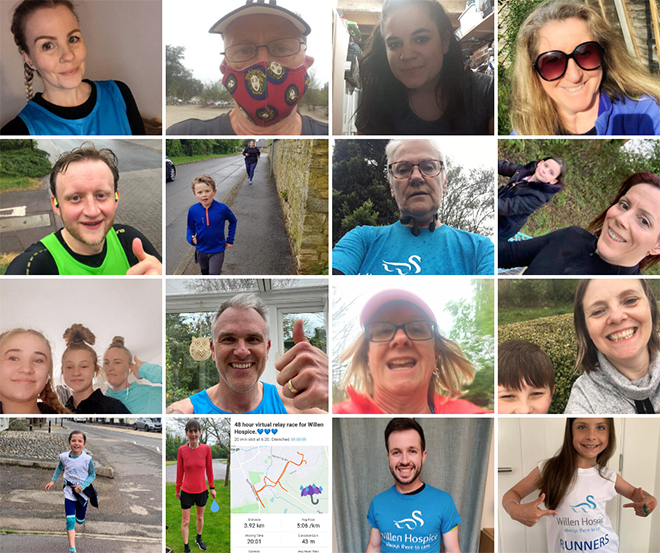 PARTICIPANTS in a virtual relay event at the weekend have raised £13,500 for Willen Hospice.

The virtual 48 Hour Relay Run, organised in partnership with energie Fitness MK was the charity’s first virtual event and was organised in response to the need to find new ways to raise money in light of Covid-19.

The money raised will pay for an entire day of care for patients both at the hospice and in their own homes, including pain management, holistic care, physiotherapy, lymphoedema, bereavement counselling, catering, and much more.

Willen Hospice events manager Tracey Jago said: “These are exceptionally challenging times for all charities, and we are no different. We are having to change and adapt both the way we deliver care and also the way we fundraise.”

The idea of the relay was hatched by energie Fitness owner Rob Francis and his team at the company’s base at Kiln Farm in Milton Keynes. “They approached us with the idea of running a 48 hour relay, with a virtual baton that could pass from person to person to keep the run going continuously,” said Tracey.

Energie Fitness set up a Zoom meeting and runners were able to log on ahead of their allocated run slot, chat to the team and then ‘receive’ the baton from the runner who was finishing their leg of the relay.

Relay ‘legs’ were made up of either 20-, 40- or 60-minute time slots. Around 90 runners took part, ranging from 71-year-old John running along a beach in Thailand, 21-year-old Sophi who ran her leg from the Sydney Opera House in Australia, and seven-year-old Hannah who took part with her mother at their home in Towcester.

“It was brilliantly simple for everyone to do and meant that we could have runners from up and down the UK and even join us from around the world,” said Tracey.

Mr Francis said: “We have loved supporting Willen Hospice since we set up our gym in Kiln Farm just over two years ago- we know that what they do for the Milton Keynes community is so valuable. As a business we have been hit by enforced closure but it has not stopped us from continuing to provide fitness, health and wellbeing activities and programming for our amazing members.

“We were blown away by the response of both our members and the wider Milton Keynes community. I believe it is a reflection of how important Willen Hospice is to our city.

Donations for the relay run are still coming in. To donate, click here.