YOU ARE AT: Business MK > News > Unlucky 13′ may be a good omen for car industry

Unlucky 13′ may be a good omen for car industry 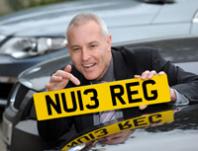 All new cars registered between March 1 and August 31 this year will carry the inauspicious ‘13’ plate.
It had been feared that the DVLA’s decision to go ahead with the conventional plate format for 2013 may cause potential buyers to defer their purchase. However, with new car registrations well up for January and the order books across the region looking good, Paul Burrows (pictured), principal automotive adviser at Grant Thornton’s office in Milton Keynes, doubts these concerns will be founded.
The Society of Motor Manufacturers and Traders reported a rise in UK new car registrations during 2012 of 5.3% to 2.04 million – the highest level since 2008.
The SMMT is also predicting that the market will hold firm for 2013.
Mr Burrows said: “While some people will undoubtedly avoid the ‘13’ number plate, there are so many good deals available on new cars at the moment that the majority will feel the opportunity to buy now is too good to miss so superstition will take a back seat.
“Manufacturers are generally trying to support the UK car market which has become a stronger market in Europe, giving dealers good opportunities to attract and pass on the benefits to the customer.”
The impact of ‘13’ plates on used car sales in subsequent years may also be overestimated. During the last few years there has been a lower availability of good quality used cars on the market due to the dramatic slump in new car sales during 2008/2009 when the recession hit.
But if current UK car sales levels stay firm, supply of used cars should remain at levels sufficient for dealers to attract used car customers with strongly supported offers and packages.
Mr Burrows said:  “As long as the UK avoids a triple dip recession – and the signs are looking more positive – the market should remain stable or on a slow upward trend backed by the full support of manufacturers.
"But it is still in a delicate state and with sterling currently weakening and exchange rates being a critical factor, we are not out of the woods yet.
“It is far more likely that economic factors such as consumer confidence will have a greater bearing on buyers’ decisions to purchase a new car than the number on the registration plate.”