YOU ARE AT: Business MK > News > University agrees research partnership with China 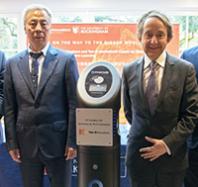 Ten-D Innovation, based in Shanghai, is providing £1.3 million for The Centre for Data Science, Computer Vision and Machine Learning at the university.

A key focus will be the application of the technologies developed to emerging industries such as electric vehicles and autonomous drones for commercial use. The partnership launched with three PhD students and a MSc by Research student – all fully-funded – enrolling at Buckingham to work on projects at the research centres.

The partnership was formally announced at a ceremony hosted by the University of Buckingham’s vice-chancellor Sir Anthony Seldon with guests including Ten-D Innovations chairman Chen Qifu and general manager Weiying Cui.

Mr Qifu said: “Buckingham’s computer science research programmes in the areas of big data and machine learning really stands out as one of the leaders in UK. It is a perfect match for our company’s focus on building the next generation of electrical vehicles that are both practical and sustainable.”

In addition to the £1.3 million, Ten-D is funding a series of projects using the centre’s specialist knowledge and is sponsoring five new charging stations across the university campus, with equipment supplied by Milton Keynes-based Chargemaster.

Buckingham alumnus Weiyou Cui, who studied applied computing at the university in 1997,  (has donated scholarships and bursaries to support the department’s initiative to increase diversity in computing.

Mr Cui was awarded The Edgar Palamountain Award for Excellence for being the ‘first among equals’ in his cohort by then Chancellor Margaret Thatcher and now works at Microsoft.