YOU ARE AT: Business MK > News > UCMK will be very experimental… and that’s exciting’

UCMK will be very experimental… and that’s exciting’ 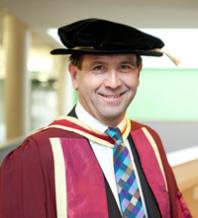 THE first handful of university students to study for degrees at the new UCMK will take up their places. However, the man at the helm of the city’s newest academic institution is already looking much further ahead.

Professor Keith Straughan, now officially installed as Dean of UCMK, is a man who knows his education. He envisages a time when more than 1,000 people come to study from all over the world, attracted by a seat of learning of international renown in its specialist areas.

With three degrees in Physics, Medical Imaging and Theology, 111 published academic papers, six patents and five high-tech business start-ups to his name, perhaps most remarkably he is also an ordained priest in the Church of England.

“I had a parish for a while,” he says “but I realised my vocation was not limited to being inside the church."
He accepted an offer to become Dean of Sidney Sussex College at Cambridge University, eventually becoming Senior Tutor and Acting Bursar. “Being Senior Tutor at a Cambridge College is a wonderful job because you have a lot of responsibility for the life and direction of the college and you can make things happen.
"My religious vocation is very important to me but I realised I could do more good by marrying the sacred with the secular.
“Sometimes on the outside you get a better view of an organisation like the Church than you do wearing funny clothes and being in a particular pigeon hole on the inside.  The world is a complex place which is rarely well understood from a single perspective.  What’s more, I think theological and scientific training can complement each other very well.”
Professor Straughan says he could happily have stayed in Cambridge for life but his interest in and commitment to the evolution of education made the chance to set up UCMK too good to ignore.
“We need places like Oxford and Cambridge but, while both institutions are on the cutting edge in terms of academic research, they are also very traditional places where change comes slowly.
"Here was a chance to start to move from somewhere with 800 years of history to one with a relatively blank sheet of paper. UCMK will be very experimental and that’s exciting.”
The word ‘university’ has legal protection. No organisation can use the title without the approval of the Privy Council and only after proving its academic worth and financial viability.
UCMK is a joint project between the University of Bedfordshire and Milton Keynes Council.  “If Milton Keynes is to continue to grow with a strong economy and effective business community, it needs a university,” Professor Straughan says.
“It is remarkable and typical of the city that, in these times of economic contraction, this really significant new development is taking place in MK. Within a few years I hope there will be a substantial number of students here with accommodation blocks, lecture rooms, labs, and all the facilities one would expect to see at a modern university.
A number of sites are under consideration and UCMK will next year add engineering and technology to the business, leadership, management and computer networking qualifications already on offer.
Professor Straughan sees Milton Keynes being a place where foreign students will come in sizeable numbers as it develops an international reputation.  He says one of the keys to this is the city’s determination to become a “Smart City,” where services, education, transport, health and digital networks are all linked together to operate hyper-efficiently and sustainably.
Professor Straughan sees his own research experience as crucial to his contribution to the Smart Cities agenda.  He was closely involved with the development of the clinical MRI scanner and of intravascular ultrasound, diagnostic tools which, he says, “don’t just take pretty pictures of people’s insides but also, with the use of some clever maths, make diagnoses and therefore treatment more accurate and appropriate.”
His work has spanned diseases as varied as breast cancer, epilepsy and Alzheimer’s disease.  Now he wants to see research of a similar calibre happening here.
“I want to see us offering an MBA [Master of Business Administration] in Smart Cities,” he says, “which could in turn lead to undergraduate degrees in the same subject, post-doctoral research – anything is possible if we get it right, and the key to that is quality.  If we can show that the education we offer is of sufficiently high standard then people will want to come.  It’s so exciting and such a wonderful opportunity.”