YOU ARE AT: Business MK > Motoring > Two out of three ain’t bad

Two out of three ain’t bad 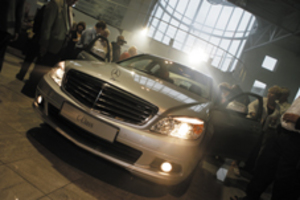 IT HAS clearly been awaited eagerly by the motoring public, as witnessed by the fact that more than 300 people turned up to its launch at Mercedes-Benz of Milton Keynesâ€™ showroom at Kingston.

The new C-Class Saloon replaces a model series of which more than 1.4 million units have been sold worldwide since spring 2000. All in all, Mercedes-Benz has delivered more than two million of the Saloon, Estate and Sports CoupÃ© models in the previous C-Class to customers all over the world, making the C-Class the bestseller in the Mercedes-Benz passenger car range.

Three major model lines make up the C-Class Saloon: The SPORT, The ELEGANCE and The SE. The new models are longer, wider and more spacious than before, with performance, safety and comfort at the top of the priority list.

Having driven a C-Class Sport 220 just recently, my verdict would be, in the words of rock star Meatloaf, that “two out of three ainâ€™t bad”.

As Iâ€™m being shown round the new car, I cannot fail to be impressed by its looks. On the Sport model only, Mercedes-Benz have opted for a very â€˜retroâ€™ grille and front, a hark back to the Mercedes-Benz models of yesteryear.

So letâ€™s take the priorities in order. First, performance.

There is a choice of four and six-cylinder engines, with up to 13 per cent more output than the preceding model and up to 6pc lower fuel consumption. The enhancements in power and torque have been made without increasing carbon dioxide emissions. Indeed, C-Class is the first car in its market segment to be awarded an Environmental Certificate, for its environmentally focused development.

The 2.2-litre powerhouse is quite something. Itâ€™s responsive, gives you the acceleration you want when you want it and delivers the quality of performance one has come to expect from Mercedes-Benz. The suspension system gives the best of both worlds in terms of ride and handling.

Now to safety. In development, the new C-Class Saloon passed more than 100 crash tests, including the particularly demanding in-house impact tests. Protection is based on an intelligently designed bodyshell, 70 per cent of which consists of high-strength and ultra high-strength steel. The front-end structure of the new C-Class has four independently acting impact levels, which enable forces to be distributed over a wide area while bypassing the passenger cell.

The safety technology has been complemented with the very latest protection systems. Seven airbags are included as standard and the driver, front passenger and the passengers on the outer rear seats also benefit from belt tensioners and belt force limiters as standard.

Mercedes-Benz has developed flashing adaptive brake lights as a major help in reducing rear-end collisions, also standard equipment in the new C-Class. If the driver needs to brake hard at speeds of mre than 30 mph, the brake lights flash rapidly to warn drivers following behind. At higher speeds of around 70 mph, flashing lights make drivers react 0.2 seconds quicker than they do to conventional brake lights.

In terms of combining technology with safety, the C-Class comes out a winner for me in this category too.

Now letâ€™s turn to the interior and the comfort levels.

I cannot fault the interior in terms of technology and access. The central colour display is part of the new control and display concept which the C-Class has adopted from the luxury-class Mercedes models. Its major advantage is rapid access to frequently used functions, which means that the driver does not need to relearn, is able to maintain familiar habits and feels at home immediately. All the control and display elements necessary and important during a journey are located in the cockpit.

Linking the standard, leather-trimmed multifunction steering wheel with the instrument cluster means rapid access to a wide range of information and functions in the driverâ€™s direct line of vision. The driver and front passenger are able to control the radio, navigation system or telephone by using the controller on the centre console, or access the main menus using direct selection keys.

As I said at the start, two out of three ainâ€™t bad and, surprisingly, itâ€™s the interior that lets the Sport range down. For a car range priced from just under Â£23,000 up to Â£33,312, I was disappointed at the level of quality.

Not that the quality is poor â€“ it isnâ€™t. However, when one takes the keys of a car with the reputation that Mercedes-Benz has, I was expecting a more sumptuous, comfortable interior. The steering wheel, while leather-trimmed, lacks the feel of a â€˜luxuryâ€™ car marque while the sports seats after a while did nothing for my driving pleasure. The upholstery too was lesser quality than I would have expected.

That said, the interior is my only criticism of the car that is sure to become a major seller for Mercedes-Benz. If you enjoy the thrill of a sports saloon, you could do a lot worse than test the new C-Class. It is sure, I feel, to become a major player in the sector.

For more information on the C Class and the rest of the Mercedes-Benz range, visit www.Mercedes-benzofmiltonkeynes.co.uk“