YOU ARE AT: Business MK > News > Tributes praise the work of Bletchley Park ‘saviour’ 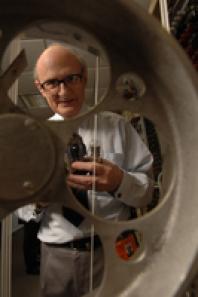 Mr Sale (pictured) and his wife Margaret were part of a small team that started the campaign for Bletchley Park and ultimately saved it for the nation.
He dedicated his long retirement almost entirely to his work at the Trust and subsequently as part National Museum of Computing based at Bletchley Park.
He was a remarkable man with a long history of engineering skill and prowess and he recognised the importance of saving Bletchley Park at a time when its true historic relevance was not fully understood.
The rebuilding of Colossus was a monumental challenge involving much research and a solid understanding of very advanced mathematics as well as the engineering skills to assemble such a complex machine.
Bletchley Park Trust chief executive Simon Greenish said: “Tony’s contribution to the early days of the development of the Trust when the site was under very real threat of development was fundamental. Without him, the Bletchley Park site and its hugely important history would perhaps not have survived.  His work on re-building Colossus was an enormous challenge and took many years to complete.”
Andy Clark, chairman of trustees of the National Musum of Computing, described Mr Sale’s contribution as “immense”. He added: “I am quite sure that without his remarkable talents, enthusiasm, and drive, the museum would not have come into existence.
"The rebuilding of a functioning Colossus Mk II, Tony’s homage to the wartime codebreakers of the Lorenz cipher at Bletchley Park, is such a remarkable piece of work that it will forever be the model of excellence to which the museum aspires.”
Mr Sale’s achievements have been recognised in recent years with honorary Doctorates from three universities.  He met Her Majesty the Queen on her visit to Bletchley Park only last month.
He is survived by his wife Margaret, their three children, seven grandchildren and one great-grandchild.
Mr Clark said: “Tony Sale’s passing is a tremendous loss to us all on a personal and professional basis, but the foundations that he helped to lay are secure. Tony’s energy seemed boundless and, despite being ill in the past weeks, he continued to work diligently: being interviewed by film crews, talking to visitors and laying plans for the refurbishment of the Colossus Gallery.”