YOU ARE AT: Business MK > Uncategorized > Tributes after ‘Mrs Bletchley Park’ dies aged 87 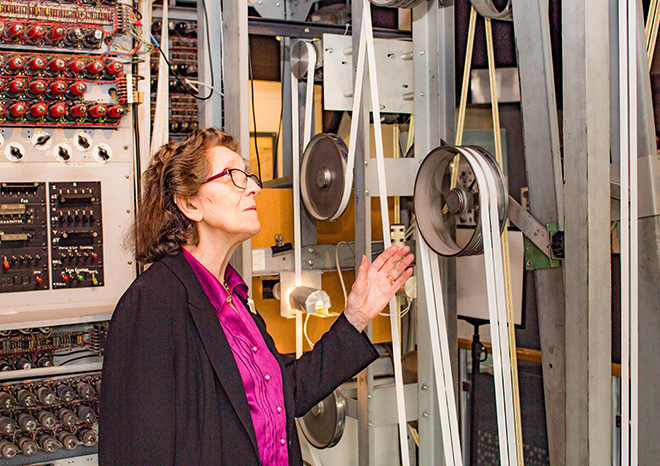 Margaret Sale and the Colossus machine rebuilt by her late husband Tony at Bletchley Park.

MARGARET Sale, a founding volunteer on Bletchley Park and for eight years a trustee of The National Museum of Computing, has died aged 87.

Born in 1932, Margaret trained as a school teacher in the post-war years and brought up a family with her husband the late Tony Sale who later led the rebuilding of Colossus the wartime codebreaking machine.

In addition to leading some of the tours, she undertook fundraising, set up lecture series and conferences, and even organised weddings in the mansion.

Volunteering her time and boundless energy free of charge, she held important roles on the Park for three decades, being present on site most days until quite recently and was generally recognised as the Park’s longest-serving volunteer.

Speaking shortly after the death of her husband Tony in 2011, Margaret told a radio interviewer, “Tony and I were known as Mr and Mrs Bletchley Park.”

When her husband and his team began the rebuilding of Colossus to honour the work of the wartime men and women on Bletchley Park, Margaret worked diligently in the background facilitating the project. She was thrilled when the new Colossus Gallery was opened at The National Museum of Computing in 2012.

A supporter of TNMOC since its inception, Margaret joined its trust board in 2011 and up until a few months before her death was to be found most weekdays engaging visitors in the Colossus and Tunny galleries at the Museum. Until recently, she was also president of the TNMOC supporters’ club.

In 2017, she received a Point of Light award from the Prime Minister in recognition of her outstanding contributions as a volunteer. In the same year, she was also recognised as one of the most inspirational women in Milton Keynes and in 2012 she received a Sunday Telegraph/Waitrose British Volunteer Award.

“In particular, her engaging manner in telling the story of the once-secret Colossus to ensure that we remember the code-breaking heroes behind its creation inspires students to consider the part they can play in improving our cybersecurity.”

TNMOC volunteer Dr Ted Coles said: “Margaret Sale was a truly remarkable woman respected and regarded with huge affection by everyone at the museum. She gently tutored me – and others ­- in the art of talking to visitors about what was likely to interest them, rather than what interests us.

“As a founder member of the Saving Bletchley Park campaign with her husband Tony, she told fascinating tales of the early days of the campaign and of the development of the Park and the computing museum.”

Because of the global health crisis, Margaret’s funeral is for family-only, but a celebration of her life is planned for when the pandemic is over.