YOU ARE AT: Business MK > News > Transport firm moves to new £15m headquarters 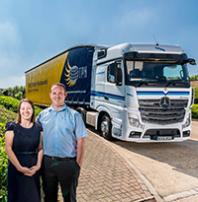 WT Transport relocated to the £15 million hub on the town’s Brackmills Industrial Estate which was opened in March by TPN.
WT Transport has covered the Milton Keynes postcodes for TPN since it became a member in 2015. The new facility has 164,000 sq ft of internal operational space and the capacity for 8,000 pallets a night.
WT Transport managing director Warren Tattersall said: “We have taken 40,000 sq ft, which is more than double the amount we had at our previous base and gives us a great platform for further growth.”

Mr Tattersall founded WT Transport in 1997 and ran only vans until 2009, when he acquired his first truck, a 7.5-tonne Mercedes-Benz Atego.

This marked the beginning of a period of strong, sustained expansion for the general haulier, which today runs a fleet of 40 rigid trucks and tractor units, and 13 vans, the majority of which were sourced through the Mercedes-Benz Approved Used programme.