YOU ARE AT: Business MK > News > Train operator says ‘Sorry’ for service disruption 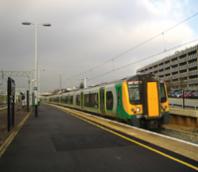 RAIL operator London Midland is offering a season ticket extension of three days as a thank-you to passengers affected by the Commissioning Timetable.
The offer of three days’ credit applies to travellers on the routes between Northampton and London Euston – whose trains stop at stations including Wolverton, Milton Keynes Central, Bletchley and Leighton Buzzard.
It also is valid for season ticket holders on the Bedford-Bletchley branch line and on the branch service between Watford Junction and St Albans Abbey.
London Midland operated fewer off-peak services during the Commissioning Timetable which was scheduled to allow the phasing-in of the full new timetable, which took effect from February 16.
Managing director Steve Banaghan said the offer was in recognition of the disruption since the turn of the year and a thank-you to passengers.
He added: “On a number of occasions since the start of the new timetable, we recognise that we have fallen short of the standards of service we should have provided. We would like to apologise for this.
“We are working hard to improve our services and have made a number of changes since the start of the new timetable.
“We believe this is resulting in an improvement in performance but accept there is still a great deal of hard work to be done.”