YOU ARE AT: Business MK > News > Towcester beefs up security as kidnapped €1m dog lines up in Greyhound Derby 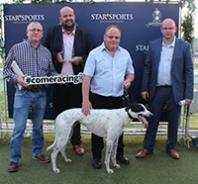 The presence of superstar Clare’s Rocket in the field for the £350,000 Star Sports Greyhound Derby tonight (Saturday) has triggered a review of the track’s security operation, with extra staff drafted in to guarantee the dog’s safety.

Clare’s Rocket was snatched from his yard in Limerick, Ireland in December last year, prompting an investigation which saw police dramatically stop a car during an attempted handover of the dog, with the kidnappers demanding a ‘ransom’ for the canine speedster.

Four men with links to dissident republicans, including one who survived a 2015 assassination attempt, were later arrested.

Security has now been stepped up ahead of the sport’s biggest race, which is being held for the first time at Towcester.

Towcester Racecourse chief executive Kevin Ackerman said: “These greyhounds are superstars and as such are extremely valuable. Clare’s Rocket is arguably the most exciting of them all and, with a likely stud value of €1 million, we need to ensure his safety.

“We have reviewed our security arrangements and no stone is being left unturned to make sure all the dogs involved in the Greyhound Derby are protected.

“Each dog will be escorted from the kennels to the track by its own verified security team and we have invested in an enhanced CCTV system to provide panoramic coverage of the track.  There will also be a notable police presence on the night.”

The kidnapping of Clare’s Rocket has drawn parallels with the disappearance of Shergar, the prized racehorse who was stolen from Ballymany Stud in County Kildare by masked gunmen in 1983 and was never seen again.

If he makes the final, Clare’s Rocket will go head to head with five rivals to compete for the £175,000 first prize, with a sell-out 10,000 crowd set to descend on Northamptonshire for the race, the biggest ever to be staged at Towcester.