YOU ARE AT: Business MK > News > Top students set their sights on F1 prize 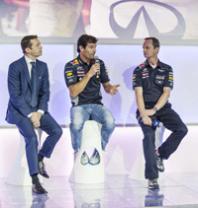 Two places are up for grabs, with the winning candidates also learning more about future road car technology and how Infiniti collaborates with the Red Bull team when they spend time at Infiniti’s Technical Centre in Cranfield.
Infiniti Motor Company has opened applications for its Infiniti Performance Engineering Academy. Two winning candidates will be selected from partner universities and colleges worldwide to complete a 12-month assignment with the quadruple World Championship-winning Red Bull team at its Tilbrook headquarters.
The opening for entries was announced by Infiniti EMEA vice president Fintan Knight left, pictured with Infiniti Red Bull Racing driver Mark Webber centre and the team’s head of car engineering Paul Monaghan during a special event at the Infiniti IREDI showroom in Dubai, ahead of the Abu Dhabi Grand Prix.
Mr Knight said: “Formula One sits at the pinnacle of global motorsport with the best drivers, the best teams, cutting edge technology and the cream of the crop of engineers from around the world.
“Just as Formula One is fiercely competitive on-track, so it is off-track when it comes to engineering careers. We have created the Infiniti Performance Engineering Academy because we want to encourage and nurture the best new engineering talent.”
Added Mark Webber, who leaves the sport at the end of the current F1 season: “Helping new racing talent develop is not new to Formula One with the various young driver schemes in place, such as Red Bull’s, but there has been less focus on nurturing engineers.
“For any engineer aiming for Formula One, I am sure Infiniti’s support is a big boost. It is a good chance to be able to work with a four-time World Championship-winning team.”
Applications for the Infiniti Performance Engineering Academy can be made now at www.infiniti-gp.com/engineering, answering the challenge: What future technology should Formula One be incorporating to keep road-relevant?
Full details of eligibility criteria and terms and conditions are available on the site.