YOU ARE AT: Business MK > News > Top designer to speak at creative sector event 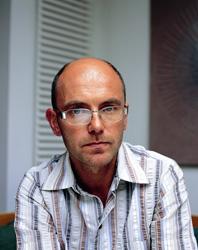 The event on October 20 is open to anyone who is seeking inspiration and motivation to further their business, or even start- their own business from scratch. It will be especially helpful to those working in, or looking to work in, the creative sector.
It has been organised by Creative Bedfordshire and Bedford Borough Council, with sponsorship from the University of Bedfordshire, Bedford College, Central Bedfordshire Council, NatWest and Business Link.
Mr Hemingway (pictured) and his wife Gerardine built Red Or Dead into a label that received global acclaim. He won the prestigious British Fashion Council’s Streetstyle Designer of the Year Award for an unprecedented three consecutive years.
In 1999, the couple set up HemingwayDesign, which specialises in affordable and social design. One of their highest-profile projects is The Staiths South Bank, which has won a series of awards including a Housing Design Awards (best large project) and Building Magazine’s ‘Best Housing-Led Regeneration Project’, as well as a Building For Life and the highest rating of any large scale scheme in the CABE  National Housing Audit.
Mr Hemingway will share his thoughts on how to set up a business to achieve success.
Bedford Mayor Dave Hodgson said: “The chance to take part in a workshop with Wayne Hemingway provides a great opportunity for local creative businesses or individuals looking to start up in this sector.
"Growing your business, breaking into new markets and networking with other firms is what this event is all about  and I am sure that attendees will find it extremely valuable.”
Places are priced £10. To book, telephone 0845 601 1000. The event begins at 5.30pm, ending at 9pm.