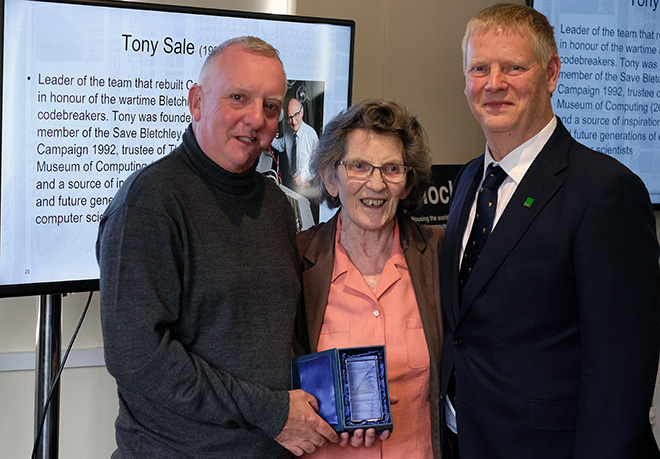 THE National Museum of Computing has awarded its first honorary fellowships.

Margaret Sale has become the first honorary fellow of The National Museum of Computing in recognition of her outstanding service to the memory of the achievements of the wartime codebreakers of Bletchley Park.

She received her fellowship award at the Colossus at 75 celebrations at the museum. At the same time, her late husband Tony Sale was posthumously also awarded an honorary fellowship.

The individual honorary fellowships are the first in a series to recognise outstanding contributions in computing and computing history. A fellowship honours board, in the shape of an oversized vintage punch card, will soon be installed in the Colossus Gallery.

In making the awards, TNMOC trustee Andy Clark said, “Margaret Sale has been a tireless advocate in the campaign to recognise the achievements of the wartime Bletchley Park codebreakers.”

Mrs Sale was a founder member of the Save Bletchley Park Campaign in 1992 and was a trustee of The National Museum of Computing from 2011-2018.

Her husband, who died in 2011, led the team that rebuilt Colossus in honour of the wartime Bletchley Park codebreakers. He was a founder member of the Save Bletchley Park Campaign 1992 and in 2005 became a co-founder The National Museum of Computing, holding the post of trustee until his unexpected and untimely death in 2011.

On receiving her award in the presence of five Colossus veterans, Mrs Sale thanked each of them in turn for their wartime work, emphasising that her own work at the museum and on Bletchley Park had been to honour their achievements and those of their wartime colleagues.

TNMOC trustee Martin Campbell-Kelly explained the rationale behind the fellowship awards. “The trustee board plans to honour the achievements of pioneers in computing and those who inspire by bringing those stories of computing history to light. We especially want to highlight the achievements of largely unsung heroes. We expect fellowships to be announced on an annual basis.”