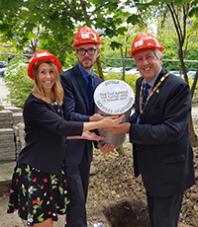 Cotels has also included logos from through the years as well as promotional items, leaflets, business cards and their famous rubber ducks.

Marcia said: “We are proud to be launching 7Zero1 in such a key year for the city, with Milton Keynes celebrating its 50th year. To commemorate this momentous occasion and special year, we wanted to capture a snapshot of 2017 for future generations to uncover.”

Cotels is a leading regional provider of executive serviced apartments in Milton Keynes, Luton and Northampton.   “7Zero1 is a huge milestone for us and set to be a flagship for the business,” said Marcia.

Cllr Hopkins said: “I welcome the fact that the team have selected Milton Keynes for the latest Cotels development and as their corporate HQ.