YOU ARE AT: Business MK > News > The robots are coming… New lab shows support for UK manufacturers 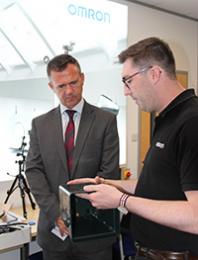 Omron has opened the £600,000 facility at its headquarters in Fox Milne. It has been designed to show how robots can advance UK manufacturing, give Omron customers the opportunity to test new products at the proof of concept stage and show how robots can enhance individual applications.

UK manufacturers are keen on the potential of robots to increase productivity and as a solution to the current industry-wide labour shortage, Omron says. But, at the same time, they are reluctant to make a substantial initial capital investment without assurance that it will provide a definite return on investment.

Unveiling the new laboratory to an audience of customers and suppliers, Omron’s general manager UK Mark Butters said: “We are investing in this facility simply to support UK manufacturing. Our global strategy is all about investing locally and developing our capability locally.”

To support that, Omron has just signed a ten-year lease on its premises in Fox Milne. The company has been in the UK for 27 years, moving to Milton Keynes in 2002, and intends to remain in the city whatever Brexit deal is struck for the UK to leave the European Union.

Mr Butters said: “The general belief is that there will be a deal and either way Omron will continue to invest in the UK. This facility is here for UK manufacturing and we have no intention of letting Brexit disrupt that. The commitment is to the UK.”

The robotics innovation lab, which has created five new jobs, delivers a proof-of-concept demonstration of a customer’s product. It also provides Omron with a platform to showcase its complete portfolio of industrial robots and its Autonomous Intelligent Vehicles, capable of moving materials and products and loading and unloading machines, allowing manufacturers to deploy personnel on more productive tasks.

Milton Keynes North MP Mark Lancaster toured the laboratory ahead of its opening. He said: “The opening of Omron’s new lab highlights that yet another international company recognises Milton Keynes as an innovative and forward thinking place to do business.

"The creation of five new jobs in the process is always good news and I congratulate the team for their contribution to develop the latest robotics and automation technologies.”

The lab also highlights how the robots can integrate with Omron’s other products, as well as its cloud-connected and Artificial Intelligence-controlled management systems. The proof-of-concept will show how Omron products can enhance the efficiency of other production areas, such as packaging and the distribution of materials, said marketing manager Dan Rossek.

He added: “Many of the manufacturers that we meet see robots as the ideal solution to the problems they are currently facing, such as difficulties in recruiting qualified, experienced personnel.

"The new Robotics Lab provides a platform that can be quickly configured to give an accurate representation of the impact that robots will actually have on the customer’s own production line, as well as allowing us to demonstrate how our other products can be quickly integrated to increase the benefits provided by the robots.

“The Robotics Lab also gives us a better understanding of our customers’ needs and provide a powerful tool that helps convert interested leads into satisfied customers.”

Milton Keynes Mayor Cllr Martin Petchey performed the official opening of the new lab, which Mr Butters said has a key role to play in Omron’s focus on innovative automation.

“It is a way of bringing the digital factory to realisation,” he added. “It is important to stress that we do not see ourselves as a robotics manufacturer or supplier. This is part of a bigger offering providing integrated automation solutions. That is our biggest strength.”