YOU ARE AT: Business MK > Charity > The power that lights up Glastonbury

The power that lights up Glastonbury 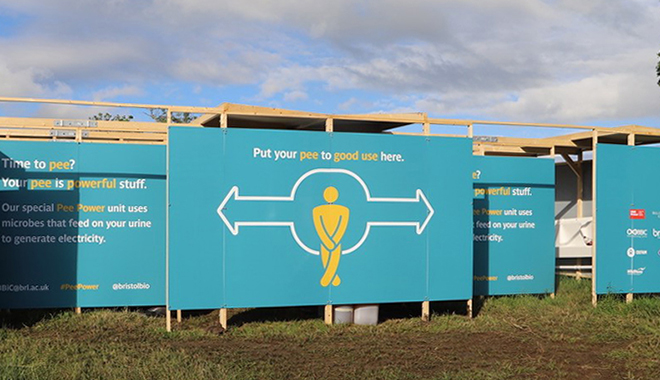 MUSIC fans are converging on Somerset for the Glastonbury Festival, which starts today (Thursday). And many will be taking a natural break in a structure housing technology that coverts urine into electricity to be used at the festival.

The PEE POWER urinal, developed by Bedford-based outdoor structure manufacturer Dunster House and being used at the festival for the fourth time, is sited at a prime location a few hundred metres from the landmark Pyramid Stage.

The urinal built by Dunster House is designed to fit the PEE POWER system, developed by the UWE Bristol and which can turn urine into enough electricity to power lighting, information screens or charge mobile phones.

The Microbial Fuel Cell technology not only can generate electricity but also produces a natural by-product plant fertiliser by sanitating the urine.

Dunster House joined the project in 2014 to manufacture the structures required to house in the project. However, the history of the Pee Power Urinal began during a PhD research project at the University of the West of England 17 years ago.

In 2015 one of the Raised Latrines from Dunster House’s Humanitarian range was displayed outside the UWE University for the first trial and the same year the first PEE POWER urinal was developed to be taken to Glastonbury.

The project is funded by the Bill and Melinda Gates Foundation and is the result of a collective effort between Dunster House, UWE Bristol and Oxfam to improve lives in refugee camps and areas with no sanitation or electricity. After three consecutive years of field testing at the Glastonbury Festival and thousands of people continuously using the structure day after day during the event, the urinal is back at Glastonbury and ready to accommodate up to 40 people at the same time.

This year smart washrooms and waste to energy specialist Whiffaway has joined the partnership by supplying new troughs to fit in the structure. Scientists developing the system have also added the new ‘Pee to Play’ feature, which will allow festival goers to play retro games on Game Boys directly powered by the system.

Academic staff from UWE will be on hand to explain how the PEE POWER technology works.