YOU ARE AT: Business MK > News > The future’s bright… the future’s red 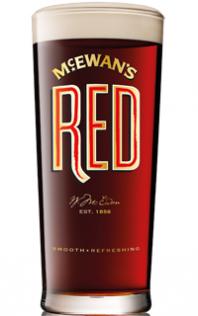 This is the first major launch for the Bedford-based brewer since its acquisition of McEwan’s and Younger’s in 2011. The addition of McEwan’s to its portfolio raised Wells and Young’s to become the UK’s second largest premium ale supplier.
McEwan’s Red represents the start of a sustained campaign of brand investment from Wells & Young’s. It aims to refresh McEwan’s current portfolio to appeal to its loyal consumer base while also introducing new variants to the range which attract a younger target market to help rejuvenate the declining ale category.
The draught beer will be brewed at Edinburgh’s Caledonian Brewery, continuing a history of Scottish brewing which dates back to 1856. Canned McEwan’s Red will be brewed in Bedford alongside the brand’s other packaged ales.
The development of McEwan’s is centrl to Wells and Young’s plans for organic growth through multi-million pound advertising investment for its flagship brands such as Bombardier.
The company is also preparing to focus on international markets. Wells & Young’s currently exports more than 8 million pints of beer to 40 countries including the USA, Canada, Italy and Australia.
The new McEwan’s Red beer is brewed to be red in colour, achieved 100% naturally by brewing with malted barley sourced from farms in the Scottish Borders.
Paul Wells, chairman of  Wells & Young’s parent company Charles Wells, said: “As an independent, family-owned business we understand how to cultivate the much-loved brands which retailers need and consumers seek out.
"McEwan’s is embedded into the Scottish culture and we intend to satisfy the consumers who already love the brand with new variants while also introducing it to a new generation of ale drinkers. Red is the right brand at the right time to kickstart this process.
“The category is crying out for a new product which is genuinely different. Given its brewing heritage there is no stronger brand  to deliver this change than McEwan’s.”