YOU ARE AT: Business MK > Apprenticeships > Tech festival bids to bridge the STEM skills gap 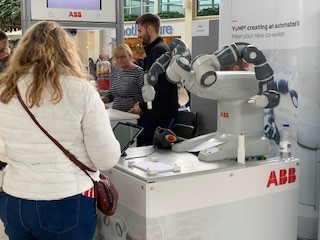 THE CURRENT reliance on science and technology highlights the need to develop home-grown talent in the sector, says a leading figure in the STEM field.

The UK has a current shortfall of 173,000 skilled STEM workers and 89 per cent of STEM businesses are struggling to recruit, costing the sector £1.5 billion a year in recruitment, temporary staffing, inflated salaries, and additional training costs.

Businesses expect the shortfall to worsen over the next ten years as expansion of the sector is set to almost double the number of new science, technology, engineering and maths roles required. That is why initiatives such as the MK Innovates: a STEM Festival scheduled for next year are vital in attracting a new pipeline of talent, says Elizabeth Sheldon.

The co-founder and chairman of digital forensic investigation specialist Evidence Talks was speaking to members of Milton Keynes Business Leadership Partnership at a virtual forum. With the proposed new university MK:U, whose curriculum will be STEM-dominated, and the Institute of Digital Technology at Bletchley Park, Milton Keynes is set to be an important focus for STEM education.

But the gap needs to be bridged to ensure that local businesses have the relevant skills required to compete in the future, Mrs Sheldon said.

“We can no longer rely on our European neighbours to fill these roles. We need to produce home grown talent and we cannot wait until young people graduate,” Mrs Sheldon said. “We need to attract them at a much earlier age.”

MK Innovates is a two-day event at Middleton Hall in centre:mk at which businesses and higher education establishments showcase a range of innovative exhibits including designing apps and mini computer programs and, last year, the opportunity to race a BRCA radio-controlled model around a racing track and get up close to a Red Bull Formula One car

“No two displays are the same. We want the festival to highlight the full breadth of STEM career opportunities open to people. And there is nothing more powerful than businesses showing children what they can do,” Mrs Sheldon said

Hundreds of local schools and colleges to attend the festival but the emphasis is also on adults looking for a career change, she added. “I have had three careers, my first being a nurse, and the festival is designed to engage people of all ages, not just school leavers, and demonstrate to them the opportunities which are available to them if they want to forge a new career.”

Mrs Sheldon is recognised as one of Milton Keynes’ outstanding women in business. She works at the highest levels of government and is director of security for the aerospace, defence and security industry body A|D|S. She chairs its Covert Technologies Suppliers Special Interest Group, sits on the Government Security Sector Board and represents small and medium-sized businesses on the government Security Resilience Growth Partnership board.

She has been honoured at the prestigious national CBI First Women awards, celebrated for her impressive achievements in the male-dominated field of science and technology, and she has several Women Leaders awards.

However, she believes that more needs to be done to encourage women to take up STEM roles.

“The lack of representation of women in STEM is a long-standing issue,” she said. “MK Innovates: a STEM Festival is just one of a huge increase in initiatives geared around tackling this gap to positively affect the number of women choosing a career in STEM. However we still have a long way to go.

“We need to promote the whole breadth of STEM across gender, ethnicity and academic divides to ensure Britain is at the forefront of STEM developments such as artificial intelligence, robotics and digital ware.”

MK Innovates: a STEM Festival has been postponed from October due to the coronavirus and has been scheduled to take place next year.

Last year’s festival attracted more than 20 organisations including AAB Robotics, Siemens, high access platform manufacturer Niftylift and Starship Technologies which operates the delivery robots that were common pre-coronavirus on the streets of Milton Keynes. They were joined by representatives from Cranfield University, University of Bedfordshire and The Open University space department.

More than 200 schools and colleges were invited to take part in competitions to design apps and mini computer programs or take up mental challenges. Visitors also engaged with gadgets, robots and displays including a central display of radio-controlled cars.